The Repression of Indigenous Chile

The Repression of Indigenous Chile 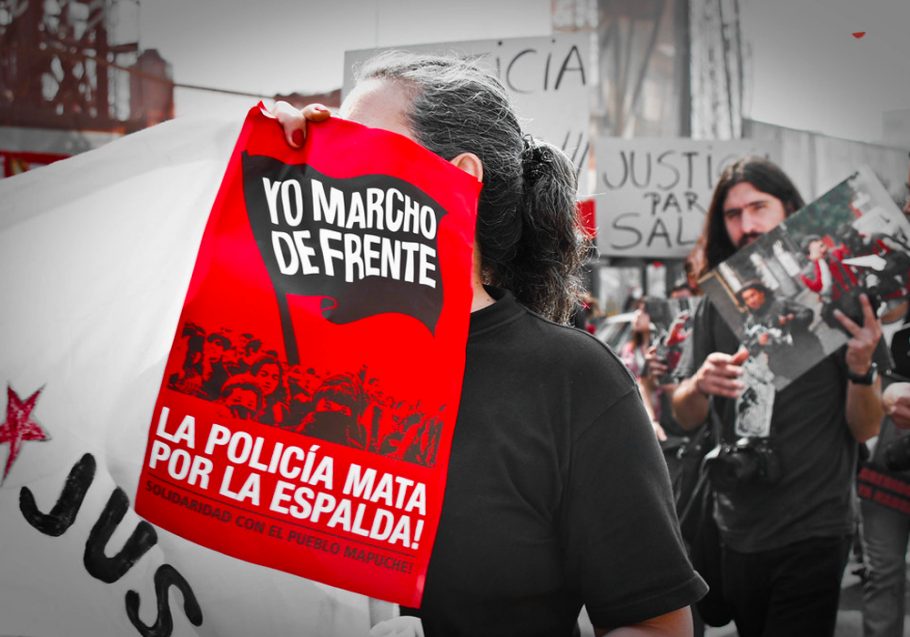 Carole Concha Bell reports on how the Mapuche indigenous community is being tyrannised by far-right groups, multinationals and the Government

On Friday 7 August 2020, mother and daughter Iris Rosales and Quiñilén y Rosa Quintana Rosales – members of the Mapuche indigenous community of Juan Pinoleo in Ercilla, southern Chile – were found hanged in their home. Within hours, the local coroner concluded that this was a case of death by suicide, a verdict heavily contested by the family and wider community.

The case has sinister similarities with that of Macarena Valdes from Los Rios, who in 2016 was found dead in identical circumstances.

Valdes had taken part in a campaign to halt Austrian conglomerate RP Global’s installation of a dam on the river Traguil. The day before she was found dead by her 11-year-old child, two men in an RP Global truck turned up at their home and ordered Valdes’ landlord to evict her or “bad things would happen”. The next day, Valdes was no longer alive. The coroner quickly concluded that it was suicide. But the family pressed for a second autopsy that revealed she had been hanged after she died – it was murder.

The deaths of the Rosales concluded a tragic chain of events for Mapuche activists and their families. After occupying a council building in nearby Curacuatin on 1 August, protesting over the imprisonment of Mapuche leaders, the activists were violently evicted by a racist mob and then detained by local police in a shameful incident dubbed ‘Chile’s Kristallnacht’. 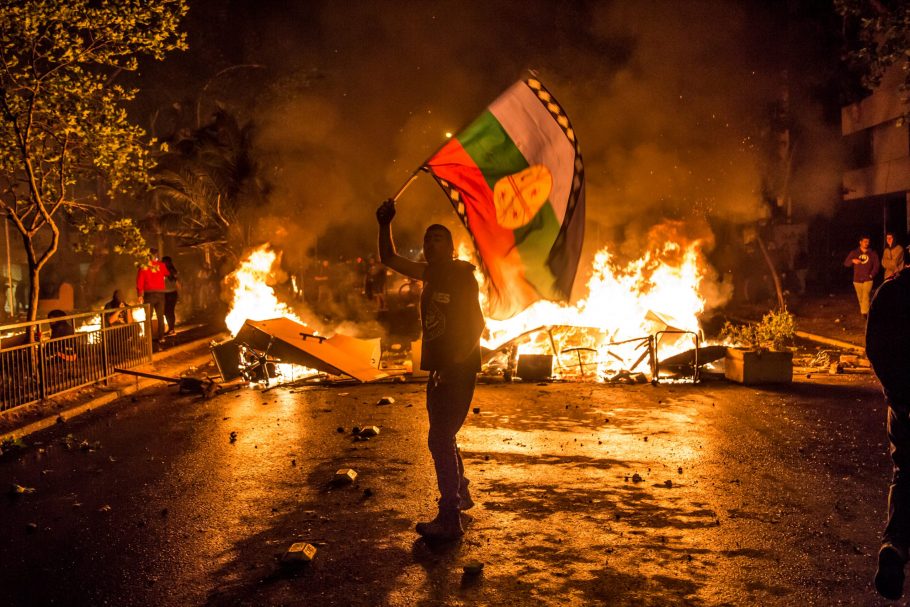 The racist mob was coordinated by the Araucania region’s far-right group, the ‘Association for Peace and Reconciliation of Araucanía’ (APRA). Its spokesperson, Gloria Naveillán, had encouraged the violence by saying: “How many are raising their hands to join us tonight in the Plaza? Bring sticks and everything you need to defend yourselves.”

The Mapuche were beaten and suffered knife wounds, while their vehicles were set alight. Women, elderly people and children were present. The police allowed the attack and even coordinated with the far-right, illustrating the collusion between the state, violent groups and local anti-Mapuche businesses.

The Mapuche, whose ancestral territories span southern Chile and Argentina, have a long history of resistance to colonial occupation.

Today their struggle for the right to live on ancestral land has been met with a militarised response and criminalisation, including the deployment of troops operating under the name ‘Comando Jungla’, trained in the Colombian jungle specifically for the purpose of suppressing indigenous uprisings in Araucania.

Celestino Cordoba, a machi (a spiritual guide), has been on hunger strike for more than 100 days and is in a critical condition. He is just one of many Mapuche leaders who have been imprisoned with scant evidence under anti-terror laws enacted during the authoritarian regime of Augusto Pinochet in the 1970s.

The incumbent administration under the leadership of President Sebastián Piñera has introduced further draconian laws, including the controversial ‘Anti-Capucha’ (face covering) and ‘Anti-barricade’ laws earlier this year, citing the recent social unrest as an excuse to punish any detractors with maximum penalties. Anyone covering their faces or blocking the road during a demonstration can now face up to 10 years in prison, in effect outlawing protest. 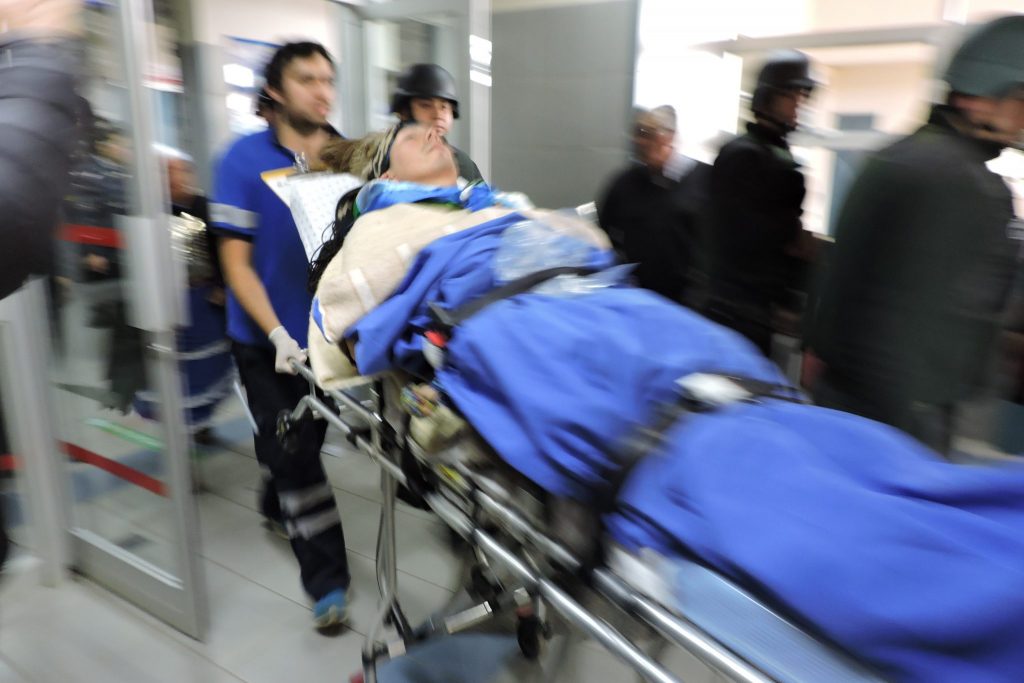 “The occupying protestors included families of prisoners and were there to highlight the discrimination that Mapuche political prisoners are being subjected to daily. The hunger-striking prisoners are now in a critical condition. Most of the prisoners are being held in preventive prison because ‘innocent before being proved guilty’ does not apply to the Mapuche. They are simply asking for equal treatment as stated in Article 169 of the International Labour Organisation (ILO), while the Chilean Government remains silent to these just demands.”

Araucania is the ancestral land of the Mapuche people, yet it is hugely attractive for foreign investors thanks to its natural and mineral resources. Forestry, fishing, energy and tourism are the key businesses that operate in the region.

Mapuche community leader and Nobel Prize winner Alberto Curamil successfully mobilised the people of Araucanía to stop the construction of two hydroelectric projects on the sacred Cautín River in central Chile in 2016. He experienced firsthand what happens when you stand up to the interests of the Chilean Government and multinational corporations. He was imprisoned on false terrorism charges in 2014, spending five years in and out of prison, and continues to be a target for local security forces, having been arrested and allegedly tortured as recently as 8 April 2020.

“Our community provides for itself and on top of that we must face corporations who take advantage of this climate of terror so that they can execute their mega projects including hydroelectric plants and logging,” Curamil says.

“This is a terror campaign where the indigenous communities and the working-class are the affected. The invasion by transnational corporations poses a multitude of risks to us. The risk is permanent because our land was invaded by economic powers and foreign capital and political state powers.”

Following pressure from national and international human rights groups, the Office of the United Nations High Commissioner for Human Rights (OHCHR) recently confirmed that its team had visited the hospital in the regional capital, Temuco, where Celestino Cordova was being treated. They also visited prisons where at least 20 other Mapuche people are on hunger strike.

The Chilean Government continues to deny Cordova’s human rights in accordance with international law and is instead preparing to force-feed him. Meanwhile, Mapuche community leaders continue to be imprisoned under draconian terror laws, convicted by kangaroo courts where the word of an anonymous witness will suffice.

Mapuche people suffer discrimination and the highest rates of multi-dimensional poverty in the country, including a lack of access to healthcare, job opportunities and education. Ancestral lands, vital to the existence of indigenous communities, continue to be violently cleared in evictions during which women, children and the elderly have been beaten, shot and racially abused.

And what is this all for? The continuous pillaging for profit by salmon, hydroelectric and forestry multinationals, wreaking ecological and societal breakdown tantamount to genocide, upon a people who depend on land for self-sustainability and cultural identity.

This is the reality of modern Chile.

100 Days of Hunger Strike: Machi Celestino Córdova- His farewell message
Faced with the racist attacks against the Mapuche people: Prince Frédéric I will appeal again to the International Criminal Court to reopen the Mapuche case