Kingdom of Araucania and Patagonia

On November 17, 1860, over 3000 Mapuche representatives assembled at the foot of the Andencul hill in the community of Chief Kilapan. This constituent assembly (Futa Kollog*), which included the nation’s most celebrated political, military and spiritual leaders, came together with the intention of establishing a constitutional and hereditary monarchy in the Mapuche territories of Araucania and Patagonia, now collectively referred to as Wallmapu. This aspiration was duly realised when King Orélie Antoine de Tounens was inaugurated as the Kingdom of Araucania and Patagonia’s first monarch.

The constitution which this constituent assembly also promulgated remains in force today. It provides for the creation of ministries, a Council of the Kingdom, a Council of the State, a Supreme Court of Justice and a legislative body founded upon universal suffrage. 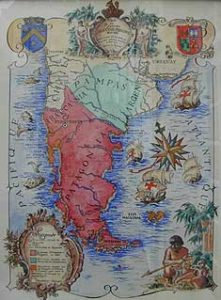 The Fight for Recognition and Survival

After its constitutional monarchy had been formally established, the Mapuche nation sought international support and recognition. According to several researchers, Great Britain, Italy, France, Peru, Bolivia and Paraguay appear to have formally recognised the Kingdom’s independence (Brazil and Persia evidenced de facto recognition).

The Kingdom of Spain itself recognized the territorial integrity of the Mapuche when it signed the Treaty of Killen on January 6, 1641. This treaty, which established the Bio-Bio river as the northern border of the Mapuche’s territory was subsequently ratified by Spain in 28 bilateral treaties and later both newly formed republics of Chile and Argentina.

The sanctity of this northernmost border was sustained in subsequent years; in fact the territory to the South of the Bio-Bio and Colorado Rivers was never conquered by the Spanish Crown. The declaration of independence by the republics of Argentina and Chile did not immediately alter the terms of this settlement; indeed, both states signed new treaties with the Mapuche nation and constructed fortifications along the borders which they shared with the Mapuche people.

In the course of this campaign of terror, the Mapuche were subjected to a sustained and brutal genocide in which tens of thousands were swiftly slaughtered and thousands consigned to POW extermination camps. Other victims were transported to Martin Garcia, a desolate island located between Argentina and Uruguay, as prisoners of war. The fate of these prisoners is unknown.

Those who survived the initial massacre were relentlessly hunted down; their homes destroyed, animals slaughtered and crops burned to the ground thus destroying their means of subsistence and self sufficiency. The fertile land and resources of the Mapuche were seized and distributed amongst foreign settlers, while the ‘fortunate’ survivors were dispersed, exploited as domestic slaves or condemned to endure starvation and destitution on small reservations. Each element of this persecution was part of a systemic policy which originated within a broader strategy of ethnic cleansing and assimilation.

Mapuche resistance to this campaign of terror continued to be symbolised by the endeavours of King Orélie Antoine I. As a result of his sovereign status, on January 5, 1862 he was kidnapped by the Chilean authorities near the border and detained for nine months in horrendous conditions, before being brought to trial and imprisoned in a lunatic asylum. He was then deported to France. King Orélie-Antoine I remained undeterred and returned to the Kingdom on three occasions to engage in national resistance against the Chilean military occupation.  Following the consolidation of the military occupation of the Mapuche territory, the Kingdom of Araucania and Patagonia government was forced into exile in France where it has continued to reside to the present day.

Sovereigns of the Kingdom of Araucania and Patagonia

Since it was founded, six sovereigns have ruled over the Kingdom of Araucania and Patagonia. They are:

The Royal House of the Kingdom of Araucania and Patagonia is currently composed of the following members:

Prince Philippe I heads the Royal House of Araucanía and Patagonia and assumes responsibility for the maintenance of its institutions. He sustains the profile of the monarchy-in-exile by conducting interviews, participating in international forums and public engagements. He simultaneously oversees commemorative ceremonies and authorises the issue of stamps, medals and the minting of coins.  On rare occasions he confers titles, Royal Orders, decorations and honours upon those who have distinguished themselves in the service of the Kingdom and the Mapuche people. Other members include:

The Mapuche people continue to struggle against the injustice of a ‘settlement’ which was imposed upon them by force. In both Chile and Argentina the Mapuche are effectively second-class citizens subject to cultural, economic and social discrimination. Their assertion of fundamental rights of justice, freedom, land rights and self-determination is frequently answered by repression and violence. Their political right to protest peacefully against policies of assimilation and cultural genocide is also routinely denied by both the Argentinean and Chilean authorities. In Chile, in particular, Anti-Terrorism Law has been used to criminalise the actions of Mapuche activists and silence expressions of dissent.

Over the past 30 years the Kingdom has consistently reasserted these fundamental cultural, social and political rights. In doing so, it has drawn upon its own wealth of knowledge and expertise and that of other Mapuche organisations and communities. In addition to raising the profile of the struggle, Prince Philippe I has therefore simultaneously strengthened the ties which organically bind the Royal House and those who continue to work in the service of the Mapuche nation.

*The Mapuche nation is traditionally located within the Wallmapu (ancestral territory), an area which is currently illegally occupied by both Argentina and Chile. In a Chilean population census of 1992, conducted by the National Institute of Statistics, approximately one million adults (those under 14 yrs old were excluded) declared themselves to be Mapuche; in Argentina it is estimated that the Mapuche account for around 300,000 of the overall population.

For further Information visit the Kingdom’s official Website at:
The Kingdom of Araucania and Patagonia