Faced with the racist attacks against the Mapuche people: Prince Frédéric I will appeal again to the International Criminal Court to reopen the Mapuche case

Home /News/Faced with the racist attacks against the Mapuche people: Prince Frédéric I will appeal again to the International Criminal Court to reopen the Mapuche case
News |

Faced with the racist attacks against the Mapuche people: 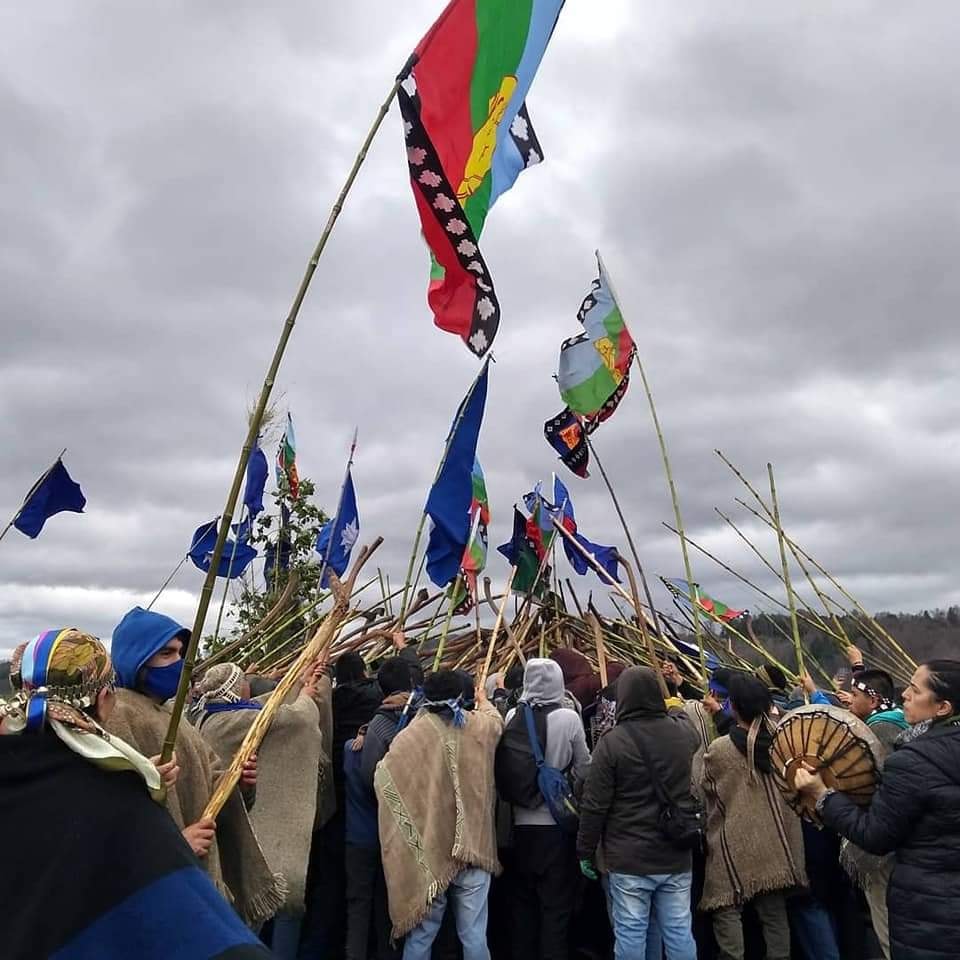 The Prince appointed the Councilor of State and Charge of Foreign Affairs, Count Mariqueo de Lul-lul Mawidha, to collect testimonies and prepare a detailed document within the powers of the Rome Statute of the International Criminal Court, in particular articles 6 and 7, related to genocide and crimes against humanity. Article 6 of the Statute details what is understood by “genocide”, establishing that this entails those acts “perpetrated with the intention of totally or partially destroying a national, ethnic, racial or religious group.” ,while Article 7 indicates what is understood by “crime against humanity”, indicating that this constitutes a series of acts “when committed as part of a generalized or systematic attack against a civilian population and with knowledge of said attack.” (1)

The attacks against the Mapuche people in Chile began with the development of projects and statutory decrees of a symbolic nature, during the beginning of the second decade of the declaration of independence of the state of Chile in 1810. Later, between 1862 and 1883, occupation plans were drawn up, which were implemented after the end of the Pacific War between 1883 and 1887, the period in which the armed resistance of the Mapuche people ended. Since then, Chile has implemented genocidal policies whose with the ultimate goal to undermine the Mapuche people’s livelihoods, thus exterminating them through hunger and ethnic cleansing as a distinct people. In recent decades, the attacks against the Mapuche leaders and communities who are demanding the restitution of their territories, are systematic and have been exacerbated by the excessive incursions of the militarized police, the army and paramilitary gangs, who act with total impunity in the ancestral territory of the Mapuche Nation.

In addition to the above we have the racism and discrimination practiced by individuals, organizations and public and private institutions, in the face of the total absence of any reaction from the Chilean government which, far from condemning or prohibiting racial discrimination in accordance with its international obligations under ICERD Art. 2-7 (2), endorses it through silence and inaction. Count Mariqueo pointed out that “we will denounce racism and institutionalized discrimination and include in the document a list, naming individuals in public positions as well as government personnel who promote racism and discrimination, whilst referring to the provisions of article 4c of the ICERD which – among other considerations – indicates that the state is obliged not to allow the authorities or public institutions to promote or incite racial discrimination’. He added that “the denial of the fundamental rights of the Mapuche by certain politicians is creating a climate of violence that threatens the peace, stability and security of the Mapuche and Chilean people ”.

Count Mariqueo stated that: “We want to remind the Government of President Piñera that Chile first illegally deprived the Mapuche State of its freedom, independence and territorial sovereignty, protected by an international treaty (Killen 1641) that remained in force for hundreds of years and later contracted an inherent international obligation for which it did not accept responsibility, but that it will sooner or later have to comply with. This commitment, that Chile chose to ignore, was embodied in Article 73 of the United Nations Charter. Chile – at this time  – did not communicate with the UN because it did not want to comply with the provisions of said Charter, derived from the principle of “equality of rights and self-determination of peoples.”

Article 73 of the Charter of the United Nations signed by Chile in 1945 in San Francisco, USA, establishes that, Members of the United Nations which have or assume responsibilities for the administration of territories whose peoples have not yet attained a full measure of self-government recognize the principle that the interests of the inhabitants of these territories are paramount, and accept as a sacred trust the obligation to promote to the utmost, within the system of international peace and security established by the present Charter, the well-being of the inhabitants of these territories.“ (3)

In a statement to the press, the Interior Minister Víctor Pérez Varela, who was appointed mayor of the city of Los Ángeles (1981-1987) during the military dictatorship, acknowledges that the Mapuche conflict is political, but at the same time points out that the Mapuche prisoners are not political prisoners. In this way, he tries to deny, like many government officials and even the opposition, that the struggle waged by Mapuche political prisoners is political. However, any observer of the real situation can see that the struggle of the Mapuche people is about the achievement of their political rights and aimed at the restitution of their ancestral territory, autonomy and self-determination, as well as their economic, cultural and environmental rights and their right to a sustainable development with the upkeep of their identity.

The Chilean constitution grants all citizens of the country a series of rights, in which the Mapuche are included. In practice, the Mapuche are treated as second-class citizens and this is reflected in their degree of participation in society and in particular in the application of laws. The Chilean rule of law does not offer them justice or protection: The laws are applied in a discriminatory manner and the accused are not being granted due process and the rights enshrined in the Constitution and in international legislation, ratified by Chile, such as the Convention 169 of the ILO on indigenous peoples. There are currently 27 Mapuche political prisoners on hunger strike – 19 of whom are in pre-trial detention. The principle of the presumption of innocence is not applied to these prisoners as it would normally be in the justice system of a democratic regime.

Mapuche mobilizations in southern Chile have intensified after the discriminatory treatment of Mapuche political prisoners during the Covid-19 pandemic. The Mapuche prisoners and their families have asked the Chilean authorities to guarantee them the same benefits as they have been granted to Chilean prisoners. The protest increased when it was noticed that those convicted of criminal acts against Mapuche had their incarcerations commuted to house arrest in accordance with the regulations introduced for the prevention of contagion in Chilean prisons. The situation is even more reprehensible in view of the fact that the arrests of a large part of the Mapuche political prisoners, who today have been on hunger strike for 107 days and who are in an extremely poor state of health, are based on mere unproven accusations.

The Counselor of the Kingdom Caballero Gaston Lion pointed out: “Because of Covid-19, Piñera pardoned thousands of common prisoners, including – for humanitarian reasons – some convicted of crimes against humanity committed during the military dictatorship. No Mapuche benefited, in spite of the fact that a large number of them are in pre-trial detention. Today he is letting the Mapuche hunger strikers die whilst they insist on their innocence and demand the application of the terms of ILO Convention 169 on indigenous peoples. In the absence of democracy, nothing can be expected from a hunger strike if the country is headed by a president without ethics or morals.“

The callousness of the current Chilean government has encouraged racism and discrimination against the Mapuche people. Prominent parliamentarians argue that the Mapuche enjoy the same privileges and representation within the power structure of the state as the rest of the citizens. These parliamentarians are pretending to be unaware of the state policy designed to exterminate indigenous peoples through the assimilation process. They openly or indirectly call to ignore or not apply international standards for the protection of the rights of indigenous peoples despite the fact that these standards have been ratified by Chile, such as ILO Convention 169 and the UN Declaration on the rights of indigenous peoples.

At the moment, the Chilean militarized police are attacking numerous Mapuche communities and are violently repressing the peaceful demonstrations held in solidarity with Machi Celestino Córdova and all the other Mapuche political prisoners on hunger strike. At the same time the United Nations High Commissioner for Human Rights, Michelle Bachelet, is always so ready to condemn Venezuela whilst remaining silent in the face of the atrocities committed daily against the Mapuche people. This makes the presence of the relevant United Nations rapporteurs in the Mapuche territory even more urgent to verify in situ the serious allegations of violation of the fundamental human rights of the Mapuche people.

2.) International Convention on the Elimination of All Forms of Racial Discrimination (ICERD)
https://www.ohchr.org/documents/HRBodies/CERD/ICERDManual_sp.pdf

3.) Charter of the United Nations
https://www.oas.org/36ag/espanol/doc_referencia/Carta_NU.pdf