Concerning the Plurinational uprising in Chile 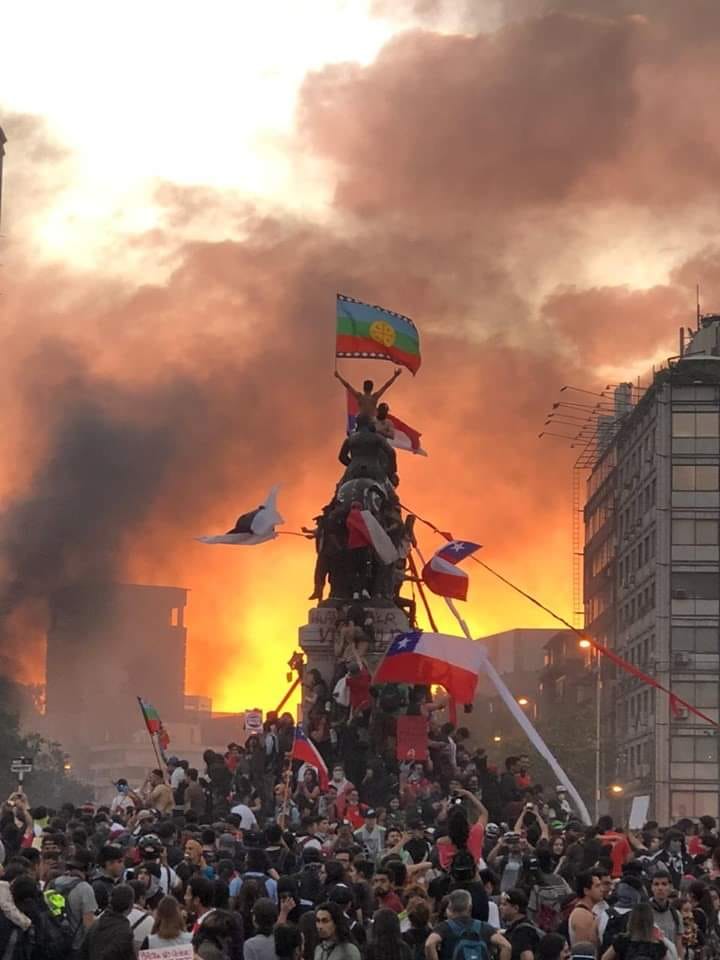 Without justice for our peoples, there will be no peace for the government

After 40 years of implementing a neoliberal economic model that exalts the private sector and involves the privatisation of all our economic and social assets – including health, education, security and law enforcement – our government and political class cannot understand the current political crisis. According to their vision, this ideology ought to guarantee the social and economic development of all Chileans. It is no coincidence that the implementation of this model has been consolidated during our years of democracy by the governments of Patricio Aylwin, Eduardo Frei, Michelle Bachelet and Ricardo Lagos. The latter, socialist president, ended up privatising all our basic infrastructure and natural resources. With the proclamation of the Fishing Law his government handed seven families the right to exploit all Chile’s maritime territory with all its marine flora and fauna.

Economic growth, based on hyper consumerism, is the basis of the neoliberal capitalist model implemented in Chile. Banks eagerly give credit to consumers through credit cards, hence more than 70% of Chileans live in debt for their entire lives. The privatised pension system, in the hands of the Pension Funds Administrator and the privatised health system, in the hands of the Institutions of Health Provision, together with the private middle and higher education providers, obligate almost 90% of Chileans to receive inadequate health care and education. All this has repercussions when combined with aggravating factors like the abuse of power and corruption from corporate, political and government leaders.

In Chile the neo-liberal capitalist model segregates, excludes and subjects to poverty the vast majority of its citizens. Chile is in the top 10 countries with the worst income inequality in the world.

The centre right and the far right, together with big business, boast of the success of their model, referring to Chile as the “Jaguar”, “Miracle” or “Paradise” of Latin America. For their part, the old centre left coalition Nueva Mayoría and its antecedent Concertación, have been faithful servants of the free market, enjoying the power that comes with allying with the system.

It´s no surprise that tensions have flared. The mass fare dodging in the Metro on October 18th was the first in a wave of protests, a plurinational uprising against the system. President Piñera declared “Chile is at war, with a powerful and implacable enemy.”, and used this statement to justify a state of emergency (Friday 18th) and curfew (Saturday 19th), ordering the army onto the street. As if resolving this conflict was just a question of employing the same repressive methods used for two decades against the Mapuche people in the south of Chile. Since then the protesters have continued to confront the military and the police in an unprecedented level of civil disobedience, showing a complete absence of fear before the authorities.

The Mapuche flag is widely displayed at the current protests along with its Chilean counterpart. The Wenu Foye (Mapuche flag) has come to represent the defiant spirit of the deep Chile. The “Indian” Chile, a symbol of identity and the struggle of an indigenous people against the Chilean state and the neoliberal system. Today that deep Chile identifies with that pre-Colonial culture, reviving the memory of the indomitable Mapuche people.

On October 20th, Santiago saw the most dramatic 36 hours of violence since the return to democracy; consequently, today on October 25th, more than a million and a half people have flooded the streets of Santiago. Along the length and breadth of the country, more than two million protestors occupy the streets, creating the largest protest in Chilean history. According to polls, 85.5% of Chileans support the recent protests and 55.3% admit to having participated in them. Thousands of Chileans across the globe are joining the protest by holding demonstrations wherever they currently reside.

After half a month of protests, there have been 23 recorded deaths and more than 2500 injured. To this date, the National Human Rights Institute of Chile records that there are currently 4464 protesters detained and 1659 wounded in hospitals with firearms injuries – of the injured 160 have serious eye injuries, having lost at least one eye from being shot with ball bearings; 64 have been tortured, of which 18 have experienced torture involving some sort of sexual element. These grave human rights violations committed against women, men, children and adolescents have prompted several foreign governments such as Canada, the United Kingdom, Australia, Switzerland, the US, among other, to warn their citizens of the risks of travelling to Chile.

We are witnessing a political, social and institutional crisis. Chile is burning, and the president and the political class does not understand what is going on in this wounded and newly awakened country.

According to polls, 75% of the population believes that the country needs a new political constitution. Some ten thousand people have recently participated in self-organised 300 local councils (Cabildo) in 73 municipalities (Comunas) across the country, to debate the possibility of a new constitution to legalize the nationalisation of natural resources, of basic utilities, the end of the current pension system and the implementation of a new system, free high quality education, decent salaries, and the return of mapuche territories taken over by Chileans and foreigners. To these demands is added that of the representatives of the indigenous peoples, who aspire to be acknowledged in any new constitution and to recover their ancestral territory. The Mapuche demand plurinationality, autonomy, freedom for political prisoners and the expulsion of multinational corporations from their territory. In short, a radical and fundamental change in structures that the neoliberal system isn’t capable of accommodating.

Years of abuse of power and unfair privilege from the political class have had the effect of excluding, segregating and marginalising the deep Chile and the indigenous peoples. After years of silence and submission, we will not tolerate one second more of injustice and inequality. We remember that in the Mapuche territory the criminalization, repression and violence on the part of Special Forces is as constant today as it has been historically.

We the undersigned express our total support for the demands of the Chilean people and the re-foundation of Chile. Chile can base its new institutions on a sounder democratic base and begin to heal the wounds of its colonial history. We wish to initiate an intercultural dialogue between Chileans and indigenous peoples. It is time to reflect on what type of local development we want, what vision for our country we leave to future generations and how we might interact with one another in a country with a plurinational political constitution. We are ready to collaborate and open a dialogue with all forces that share these aspirations.

Neoliberalism was born here, and here it will die.