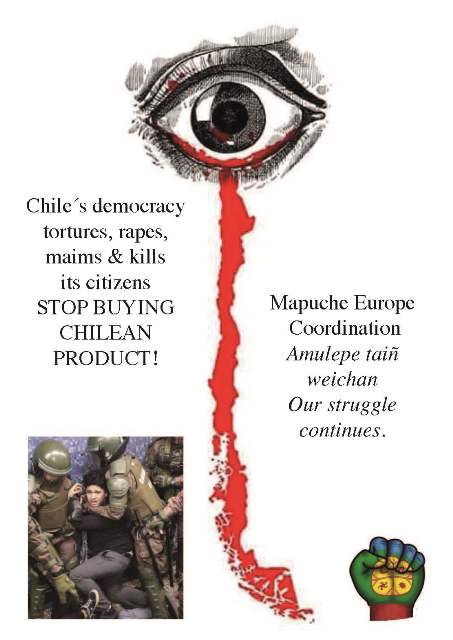 Without justice for the people, there will be no peace for the government.

We are initiating a boycott of Chilean products in support of the demands of the Chilean people. President Piñera has declared war against the people of Chile and its indigenous communities. In just three weeks of protests, at least 23 people have been killed, 4,000 injured and 5,000 detained. Social organisations report 64 cases of torture, 160 reports of sight loss as a result of being shot in the face, and 18 rapes, all carried out by the police.

Chile is on fire and it seems that the President and the political elite aren’t grasping the direction this wounded but newly awakened country is headed. The people of Chile demand a constitutional assembly and a new constitution that will legalise the re-nationalisation of natural resources and basic services, implement a new pension system, and introduce free education of a high standard and decent wages.

The indigenous peoples of Chile demand constitutional recognition and the restitution of ancestral lands. The Mapuche demand plurinationality, autonomy and self-determination, the release of political prisoners and that multinationals leave their territory.

We call for solidarity and political support for the struggle of the people of Chile. Through the boycott of Chilean goods we wish to pressure the Chilean government into responding to our demands of liberty, justice and self-determination. We call upon sympathetic organisations to support us in publicising this campaign via social networks, through the media and by campaigning at premises where Chilean products are being sold. We aim to make the authorities more aware of the loss of human lives and the danger of aggravating this conflict between the state and the people of Chile.

Neoliberalism was born here – and it will die here.