A Prestigious Award for Chile Is a Headache for Piñera

A Prestigious Award for Chile Is a Headache for Piñera

By Emilie Sweigart | April 29, 2019
The Goldman Prize was just awarded to Alberto Curamil, a jailed Chilean environmental activist, shining a spotlight on Chile’s policies in the Araucanía. 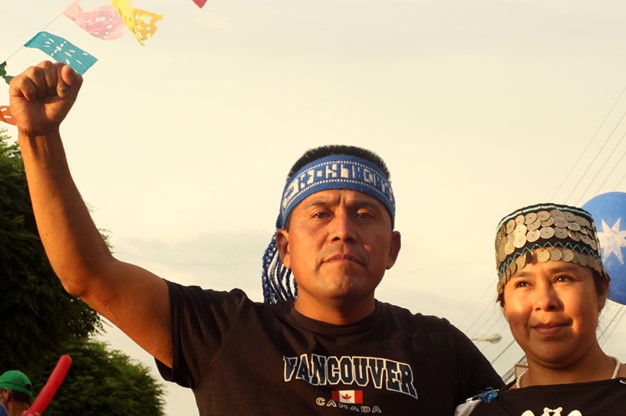 The world’s top honor for environmental activism has been awarded to an imprisoned indigenous leader in Chile, spotlighting tensions between the country’s Mapuche community and the government and likely reigniting what has been a contentious debate over President Sebastián Piñera’s security policies.

Alberto Curamil, a Mapuche environmental activist, was announced as the winner of the 2019 Goldman Environmental Prize for South and Central America on April 29 for his leadership and “multipronged strategy” to protect rivers and forests in Chile’s Araucanía region. Curamil, who successfully blocked the construction of two hydroelectric power projects in 2016, was arrested last year for allegedly participating in a robbery, a charge his community disputes as political. He’s currently in jail, waiting to appear before a judge in May.

Curamil’s detention and activism are emblematic of the discord between the Mapuche community (Chile’s largest indigenous group), private landowners and law enforcement. The conflict has existed for centuries, but what happens in the Araucanía today has ramifications not only for land rights and environmental issues in Chile, but also for security and economic development.

In recent years, the Araucanía has been the site of sporadic arson attacks on local landowners, and the ensuing conflict with police has put security issues at the center of public debate. Polling data from the Centro de Estudios Públicos, a think tank, shows that since April 2015, crime has topped Chileans’ list of concerns. In turn, Piñera made improving public safety a pillar of his 2017 presidential campaign, and an integral part of his crime reduction plan has been the pacification of the restive Araucanía.

Piñera’s strategy began to draw criticism in June 2018 with what has been considered an outsized response to violence in the region, by deploying a specialized unit of the carabineros (Chile’s military police) in the Araucanía. The antiterror unit is commonly known as the Jungle Command and was equipped with advanced surveillance technology and military-grade equipment, including armored vehicles and drones.

“Jungle Command was really a publicity stunt more than an actual change in policy, and it miserably backfired,” according to Patricio Navia, professor of liberal studies at NYU and a professor of political science at Diego Portales University in Chile.

Piñera in turn followed the rollout with the announcement of his Plan Araucanía in September, an eight-year, $8 billion strategy to develop the region and provide a forum for dialogue between Mapuches, the government, civil society and local farmers. The plan also includes a ministry of indigenous affairs, constitutional recognition for indigenous peoples, and investment in infrastructure, health and education.

Despite the president’s plan, tensions flared again in November, when police shot and killed Camilo Catrillanca, the grandson of a Mapuche leader. Catrillanca was driving his tractor away from the Jungle Command when a member of the unit fired a lethal shot into the back of his head. The killing sparked protests throughout Chile as well as international condemnation, leading to the withdrawal of the Jungle Command from the Araucanía in December 2018.

“The government suffered because there was an effort to cover up what happened,” said Navia. Shortly after the incident, approval ratings for Piñera fell below 40 percent for the first time in his second term. The same poll registered a historically low approval rating for the carabineros.

“After the Catrillanca situation, corruption scandals and the use of force by the police in the last two or three years, there is a growing recognition that something is going on that is not right,” said Lucía Dammert, a public security expert and professor at the Universidad de Santiago de Chile.

The security debacle may have also frustrated Piñera’s plans to improve the economy of Chile’s poorest region. The Araucanía is “an important region with high levels of poverty and very little investment and economic growth,” Navia told AQ. “For the government it is important to get this region moving because it’s lagging behind the rest of the country.”

Ahead of the COP 25 climate summit in Santiago in December, Curamil’s Goldman Prize win calls attention to a part of Chile where the government has made a series of missteps. “Plan Araucanía will not be a central part of the policy of this administration in the future,” said Dammert.