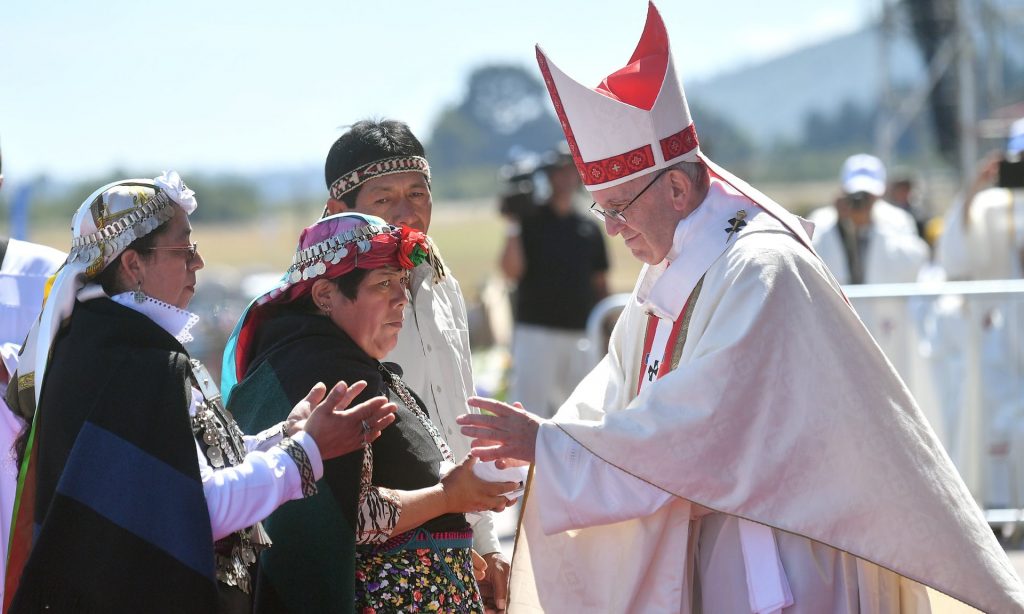 Pope Francis has denounced the use of violence to achieve political gains as he travelled to the heart of Chile’s centuries-old conflict with the indigenous Mapuche people, where a spate of church burnings have been blamed on radical activists.
Hours after another church and three helicopters were torched, Francis celebrated mass at a former military base that not only lies on contested Mapuche land but was also a former detention center used during Chile’s military dictatorship.

“Violence begets violence, destruction increases fragmentation and separation. Violence eventually turns a most just cause into a lie,” he told an exuberant crowd at Maquehue air base in Temuco.

Before the pope’s visit, the Araucania region that is the heartland of the Mapuche had been hit by repeated attacks by protesters who burned or bombed churches, logging trucks and schoolhouses. Prosecutor Enrique Vásquez told local media on Wednesday that investigators found a sign and pamphlets demanding the release of Mapuche prisoners at the scene of the burned church, while pro-Mapuche pamphlets were found at the scene of the burned helicopters.

At the start of a mass, Mapuche dressed in traditional garb of colourful woven ponchos and headbands made of silver trinkets played indigenous wind instruments and small drums.

“A culture of mutual esteem may not be based on acts of violence and destruction that end up taking human lives,” said Francis.

Indigenous communities of south-central Chile have long accused the state and private companies of taking their ancestral land, stripping it of natural resources and using heavy-handed enforcement against their communities.

About 600,000 Mapuche live in Chile, many in the forested, hilly provinces ringed by volcanoes and lakes of Araucania and Bio Bio, roughly 400 miles (650km) south of Santiago.

“Solidarity … is the only weapon we have against the ‘deforestation of hope’,” Francis said. He quoted national poets on the struggles of Chileans and the beauty of their land.

Mapuche relations with the state and settlers of European descent have been fractious since the Chilean army invaded the territory of the Mapuche in the late 19th century.

“I hope that the pope gives us the opportunity to tell the world our story,” said Isolde Reuque, a Mapuche leader from Temuco. “It’s the Chilean government that needs to resolve our problems, not the pope.”

Francis, whose homily was interrupted repeatedly by applause and at times by the blowing of tribal instruments, asked for a moment of silence for those who had suffered “so much pain and injustice” in the past.

Last year Chilea’s president, Michelle Bachelet, asked for forgiveness from the Mapuche community for such “errors and horrors”. Her government accelerated a programme giving property titles to indigenous communities, and launched initiatives to improve infrastructure and access to drinking water in remote areas. But the Araucania region that is home to the majority of the country’s Mapuche is still the poorest in the country.

The Maquehue airfield near Temuco, where the pope celebrated mass on Wednesday, was one of the principal torture centres of the region during the early days of the 1973-1990 dictatorship of the late Augusto Pinochet.

“We offer this mass for all those who suffered and died, and for those who daily bear the burden of those many injustices,” Francis said.