Defiance of the Mapuche

Home /News/Defiance of the Mapuche
News | 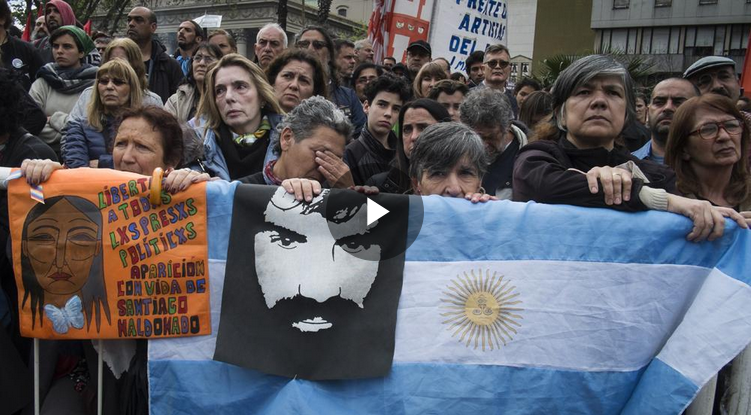 The Mapuche people of southern Argentina and Chile have long protested the loss of ancestral lands at the hands of the colonial-era settlers. The settlers followed Spanish conquistadors down the spine of South America in the 16th century, territory that nowadays is dominated by vast privately owned estates and huge timber plantations. Campaigners say the plantations have left the region environmentally depleted and the indigenous inhabitants mired in poverty.

Recently, these simmering resentments have been coming to the boil.

Increasingly forceful Mapuche activists, determined to establish their rights through direct action, have clashed with correspondingly belligerent security forces – the latter egged on, say protesters, by right-wing, pro-business governments in both countries. After occupations, demonstrations, security raids, a rash of arson attacks on timber estates, the alleged murder of activists by police, some fear that matters are beginning to spiral out of control.

By Glenn Ellis and Guido Bilbao

The jacaranda trees were flowering in Buenos Aires, giving Argentina’s capital a tranquil air, but it was somewhat at odds with the story we had come to cover. Iconic images and posters of Evita and Che Guevara scattered around the city had been joined by another equally striking face, that of one Santiago Maldonado – a young man who last August became tragically caught up in the story of the Mapuche, the indigenous inhabitants of Patagonia, a vast territory on the southernmost tip of South America encompassing much of Argentina and neighboring Chile.

The Mapuche are attempting to reclaim their ancestral home, a desperate gambit that has brought them into increasingly bitter conflict with the authorities. One man who’d been championing their cause is Adolfo Perez Esquivel, the 1980 Nobel Peace Prize laureate. We had arranged to meet at a gathering to remember Argentina’s 30,000 missing – people who were “forcibly disappeared” by the dictatorship of the 1970s. The occasion was apt, since Maldonado was last seen alive fleeing police during a raid at the Mapuche community of Pu-Lof, where villagers are locked in a land dispute with Italian clothing giant, Benetton, which owns a vast estate in the area. Maldonado had gone to support the community which had occupied a tiny fraction of the estate, much of which they regard as ancestral land, taken from them many generations ago by force. According to Esquivel, “The government privileges big foreign companies over indigenous people. They are discriminated against, marginalised, pursued … victimised.”

Pu-Lof has become a focal point for Mapuche resistance, its inhabitants enduring many violent police raids. Emilio Jones, described to us the moment during one such raid last February when he was shot in the face, “A police truck came around 5pm. They talked through a loudspeaker. We went to look and it was gone. Later it returned, they got out and started shooting, Pum! Pum! I received a shot that broke my jaw.”

Emilio survived thanks to a sympathetic journalist who rushed him to the nearest hospital some 50 miles away, but he has a nasty scar across his throat. During a similar raid, Santiago Maldonado vanished, traumatising the country and awakening painful memories of past dictatorships.

Argentina’s President Mauricio Macri appeared on TV to deny his government’s involvement in the disappearance. Then, after three months, Maldonado’s body suddenly appeared in a river close to where he had last been seen. Somehow, seven previous searches had missed the body, leading some to speculate that it had been put back in place. The official version was “death by drowning”, but many question this, including Perez Esquivel. “I cannot believe the government,” he told us. “They try to deflect criticism instead of investigating the police. The government is responsible for this … and we see it in many other repressive policies.”

If the Maldonado case has catapulted the cause of the Mapuche to centre stage in Argentina, then over the Andes in neighbouring Chile, the Mapuche conflict has pushed the region to the breaking point. At stake, say the Mapuche, is their way of life, threatened by a surge in environmentally destructive logging and mining operations. The Mapuche, for whom nature is sacred, say they are fighting not only to recover their lands but to protect them. “For us, it’s life or death,” says Ramon Llanquileo, who recently reclaimed land inside a timber concession and with his family grows potatoes, corn and beans, as his ancestors did. “If we fight for the land, recover the trees, nature, and animals, there’s a chance. If we don’t, we’re condemned to disappear.”

A secret group, CAM (Coordinadora Arauco Malleco), is engaged in an increasingly ferocious sabotage campaign against the timber industry, causing millions of dollars’ worth of damage by torching the logging trucks that transport the felled trees. The Chilean government has responded by invoking an anti-terror law drafted during the time of Pinochet. It’s led, say activists, to the collective punishment of scores of peaceful indigenous communities, leaving dozens with gunshot wounds and several dead. Ana Piquer, National Director of Amnesty International, says that many Mapuche have been wrongly imprisoned on the testimony of protected witnesses, often for years before being acquitted; that Mapuche leaders have been kidnapped and tortured; and that even children have been shot and wounded.

“It affects the whole community,” she said. “They arrive violently; they raid every house, throw tear gas … In one recent case, a pre-school with little children were all affected and had to be taken to hospital.”

In the Patagonian province of Araucania, designated a conflict zone, we met scores of Mapuche victims – including a boy whose leg remained riddled with shotgun pellets six months after his village was raided by security forces. His mother told us staff at the nearest hospital refused to treat him saying, “You burn our logging trucks, don’t expect us to help your son.”

In fact, the shooting of Mapuche youths by police is not uncommon, although no officer has ever been brought to justice. In the small town of Collipuli, we met Ada Huentecol, whose son Brandon was shot in the back last year while trying to defend his 12-year-old brother. Ada showed us a picture of the police sergeant allegedly responsible, “He shot him at point-blank range, for no reason. My other son Isaias, was being kept by his side, on his knees, pointing their guns at him.” Ada has sought justice through the courts, but the sergeant has so far failed to attend three hearings.

That sense of impunity, that the police can get away with murder, undoubtedly fuels support for the fighters who can see no other way to fight back. We were eager to speak to CAM, the main group responsible for the recent arson attacks. At a hideout in the mountains, we met Hector Llaitul, its leader, who offered this bleak assessment. “We’re talking about the death of Mapuche militants, disappearances, political imprisonments. We find ourselves obliged to respond to this violence against our people, and to take some kind of direct action to oppose it. We see that the conflict has no solution in the short term.”

Many feel that the prospect for a peaceful resolution was dealt a serious blow last December when Sebastian Pinera, Chile’s only billionaire, was elected president. Known for his uncompromising stance towards the Mapuche, Pinera has vowed to strengthen the Pinochet-era security laws and increase the use of protected witnesses to crush groups he describes as “terrorist”. Many Mapuche feel they have no choice but to resist; that they now occupy less than five percent of their former lands and time is running out. But whether in Chile or over the border in Argentina, they are up against forces that for centuries have kept them in check.

As another protester dies in occupied indigenous lands, Argentina must stop trying to erase its past
Pope wades into indigenous conflict telling Chile’s Mapuche to shun violence