The Mapuche, whose ancestral territories span southern Chile and Argentina, have a long history of outright resistance to colonial occupation. The coronavirus pandemic and Chilean state’s response to it are yet another hurdle, together with criminalization and militarization, in the Mapuche struggle for autonomy.

“The Chilean government considers resource extraction and privatization as central to Chilean economic development. To this end, the state has been actively pursuing policies that prioritize the expropriation of land and capitalization of land-based resources in the regions that Mapuche consider as their ancestral homeland,” said Huseyin Cakal assistant professor at Keele University in an interview with Toward Freedom. “Thus, the Mapuche constitute perhaps one of the most disadvantaged Indigenous communities in Latin America.”

Unfortunately, the coronavirus pandemic promises to further complicate the situation for Mapuche communities. “Without access to healthcare, it is not a surprise that Mapuche are and will be the worst hit segment of the society during the COVID-19 pandemic,” said Cakal. 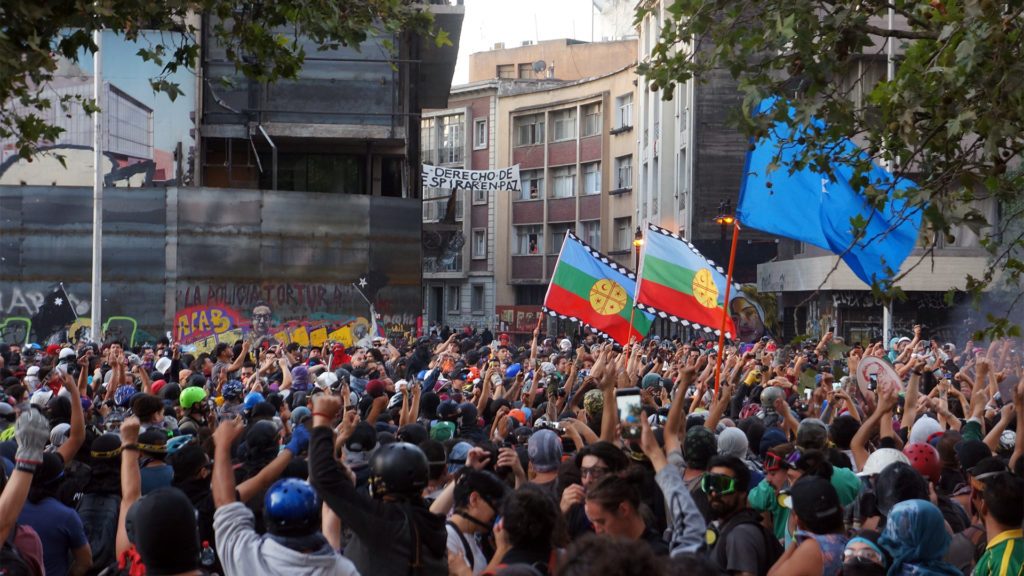 “We do not reap the benefits of state health or any kind of prevention that the government has adopted in other regions,” said Mapuche leader Alberto Curamil in an interview with Toward Freedom. “Instead of helping the sick, they have imposed military curfews on us.”

Curamil won the Goldman Environmental prize 2019 for mobilizing with the people of Araucanía to stop the construction of two hydroelectric projects on the sacred Cautín River in Central Chile. He bears the title of Lonko (traditional Mapuche leader), and was imprisoned on terrorism charges in 2014, spending five years in and out of prison before being absolved due to lack of evidence. In the context of the recent uprising in Chile, Curamil continues to be a target for local security forces. He was last arrested on April 8th 2020 while traveling to a Mapuche village nearby, and he says he was tortured while detained.

The majority of Mapuche people reside in Araucanía in Southern Chile, although some have migrated to the capital, Santiago, in pursuit of work. As the pandemic hit Chile, the city of Temuco, where Curamil lives, emerged early on as a coronavirus hotspot.

In the context of a pandemic, the criminalization of the Mapuche struggle to live on their ancestral lands places them at risk because of the high rates of imprisonment of activists and spiritual leaders. Poor sanitary conditions in prisons plus a high rate of infection in the general population have already placed Mapuche prisoners at risk.

Lonko Facundo Jones Huala, a Mapuche leader from Argentina extradited under terrorism laws to Chile, had close contact with a prison psychologist who tested positive for the virus. Following the incident Jones Huala was placed in isolation for two weeks further depriving him of his rights.

“We are not even allowed to visit Mapuche political prisoners, who are extremely vulnerable,” said Curamil. “At the prison, no sanitary guidelines are being implemented, the prisoners are being punished yet again.”

The Araucania region has the highest rates of multidimensional poverty in Chile. This means poor access to healthcare, education, job opportunities and living with the daily threat of violence and environmental hazards. The public healthcare system has just 1.4 beds per thousand people compared to 2.1 nationally, and 4.6 ventilators per 100,000 compared to 9.2 national average. Access to health care and medicine is a contentious issue among Mapuche people.

“Capitalists have access to health care, and we do not,” said Curamil. “When I speak about not having access, I’m referring to traditional Mapuche medicine, because they destroyed our traditional methods.”

President Sebastián Piñera initially indicated that some 1,300 prisoners would be freed to continue their sentences under house arrest in order to contain the spread of the virus in prison. To date, there has been no mention of including the Mapuche prisoners among those released.

“The pandemic is a worry for Mapuche communities even though we don’t have that much contact with the external people, but we are in a region where there’s much foreign and national tourism,” said Curamil via WhatsApp. “We have also been invaded by transnational corporations, all of which pose a multitude of risks to us. The risk is permanent because our land was invaded by economic powers and foreign capital and political state powers.”

Chile’s response to the pandemic, like elsewhere in Latin America, has been lacking and appears more like a military campaign than a public health campaign

“Far from providing the ventilators necessary to save lives, the Chilean government continues to invest in military equipment with which to repress the Mapuche people, still claiming the restitution of their ancestral land,” according to Reynaldo Mariqueo.

Mariqueo is a founding member of Mapuche International Link, a UK-based NGO that campaigns for the rights of Mapuche people (and with which I volunteer as press coordinator).

State repression against the Mapuche has long been intense and bloody, yet they remain the only peoples the Spanish and subsequent Chilean governments failed to conquor. During the 1800s, the key conflicts revolved around jurisdictional autonomy, return of historical territory and cultural identity.

In 1883, after defeat at the hands of the Chilean state during the “Pacification of the Araucanía,” Mapuche communities were forced onto reservations that made up only six percent of their original territory. By 1930, one-third of these already reduced land claims had been usurped.

Under the socialist administration of Salvador Allende, some rights were restored through agrarian reforms, in which land was expropriated from rich landowners and multinationals and handed back to communities. In 1972, Allende passed a law recognizing Indigenous people as existing independently of their lands. A promise to restore Mapuche lands that had been usurped since the pacification was made.

But the brutal regime of Augusto Pinochet, which seized power in 1973, reversed these reforms. Those who participated in the socialist experiment were rounded up, tortured, and sometimes killed. Many fled the country. Over the period of Pinochet’s rule, Mapuche land was reduced from 10 million hectares to a mere 400,000.

Attempts to reclaim land were branded as terrorism and several laws were drafted to quash Mapuche political organization, including the 1984 Terror Law. The law gives anonymity to witnesses in court, imposes higher sanctions and penalties for crimes, and allows for suspects to be held without bail before trial. This law is still being invoked to jail leaders such as Curamil and Machi Celestino Cordoba, who is currently on hunger strike in the Temuco Prison.

Far from a return to peace following a negotiated return to democracy, during Michelle Bachelet’s administration the Commando Jungla, a militarized arm of the national police, was created in response to land conflicts. That command was responsible for shooting unarmed Mapuche father of two, Camilo Catrillanca, in 2018.

Twenty-four-year-old Catrillanca was returning home after working on his tractor with a fifteen-year-old friend, when he was apprehended by officers from the Comando Jungla, who accused him of car theft. He was shot in the neck at close range and died immediately. Catrillanca was a well-known student activist and the grandson and son of prominent community leaders.

His killing provoked an outpouring of protest, outrage and condemnation, but the Chilean government failed to learn from the incident. Today, members of the Comando Jungla are accused by Mapuche people of using excessive force and racist language during land sweeps in which elders and children have been beaten and shot. Dictatorship-era security laws are still invoked to raid homes of community leaders, arrests are often violent. On other occasions, Mapuche settlements are occupied by private landowners or businesses, then ruled illegal and violent evictions against communities on their ancestral land are carried out.

Marginalization, militarized responses to autonomy and multi-dimensional poverty have historically cast a shadow over the existence of Mapuche peoples. But the coronavirus brings with it further discrimination in the provision of healthcare and a real threat to the subsistence to the Mapuche people.

“Our community provides for itself and on top of that we must face corporations who take advantage of this climate of terror so that they can execute their mega-projects, including hydroelectric plants and logging,” said Curamil. “This pandemic is a terror campaign affecting Indigenous communities and the working class.”

Carole Concha Bell is a Cambridge based journalist, founding member of the Chile Solidarity Network and press coordinator for Mapuche International Link.