The murder of Rafael Nahuel and the bullet wounds inflicted on three other Mapuche youths are added to the violent raids, torture, harassment and detention of women and children in Villa Mascardi carried out by the Argentine security services. Despite being injured, Fausto Jones Huala (brother of Lonko Facundo) and Lautaro Alejandro González are detained in Bariloche, while Micaela Johana Colhuan, who had been wounded by bullets, has been hiding in the mountains since Saturday, 25 November, along with other Mapuche young people for fear of being killed by the police. The existence of the Mapuche people in Patagonia goes on amidst violence and persecution by the repressive forces of the Argentine state. 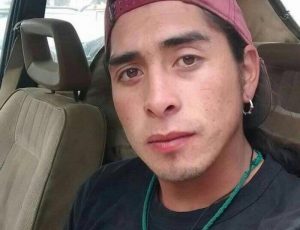 The information emanating from the Puelmapu (Argentina) fills us with consternation about the degree of repression carried out by the current Macri governemnt against the Mapuche communities who survived the genocide of General Roca a little over a hundred years ago.  Rafael Nahuel, a twenty-one-year-old Mapuche youth, was riddled with bullets on Saturday, 25 November in Villa Mascardi, Río Negro. He was returning with his companions from the mountain where they had taken refuge, when they were suddenly attacked with bursts of machine gun fire by a unit of the Naval Prefecture.

Faced with the disproportionate military deployment on Thursday, 23 November, the Mapuche youths of the Lafken Winkul Mapu community fled to the mountains to save their lives. They believed that in this way they could avoid a tragic outcome like what happened to Santiago Maldonado. The latter was recently killed by the gendarmerie for the solidarity he showed during a peaceful demonstration by Mapuche communities who were calling for the release of their lonko (Mapuche political authority) Facundo Jones Huala, who is currently in prison. It has been reported that since the incident, three of the youths have been hit by lead bullets and  two being tortured while in detention, while the whereabouts of other members of the community are unknown.

The Naval Prefecture, a dependent entity of the Argentine Navy, is trained to defend the country from external enemies, to protect the maritime coast, rivers, ports and other navigable waterways and not to control social protests. The repression unleashed by this institution last Thursday and Saturday, is aimed at intimidating and persecuting an indigenous people because of their ethnic origin, a people that has historically suffered genocide and territorial dispossession at the hands of the Argentine state. In fact, it represents the continuation of that genocidal policy which is aimed at exterminating it as a distinct people and denying it its right to preserve its pre-existing cultural heritage dating back to a time before the formation of the Argentine state. In a democratic country supposedly under the rule of law this action constitutes an abuse of power, because it contravenes customary law and international humanitarian laws that protect indigenous peoples.

This incident occurs in the midst of a climate of stigmatization, racial hatred and discrimination against the Mapuche who fight for the recovery of their ancestral lands. The Mapuche communities demand the right to live in peace in the territory of their ancestors, the right to maintain their cultural identity, maintain their language, their environment and spirituality, rights enshrined in national and international legislation, which the Macri government should respect.

Representatives of the current government and sections of the Argentine press, as well as groups of the extreme right, have perversely distorted the just demands of the Mapuche, in order to incite racial hatred towards them and justify the repression that we witness at this moment. The invocation of certain principles and rights enshrined in the UN Declaration on the rights of indigenous peoples, such as autonomy, self-determination and self-government are misinterpreted as separatist aspirations.

In order to deny the Mapuche the right to claim their ancestral territory, they accuse them of being foreigners in Argentina, they do not see them as Argentines, their Mapuzugun language is classified as a foreign language, in short, they treat them as second-class citizens. All this, in spite of the fact that academic research and evidence found in the form of archaeological remains (we are referring here to research conducted by the Argentine universities themselves) clearly shows that the Mapuche have lived in Patagonia for hundreds of years before the arrival of the Spaniards to the American continent.

Referring to the death of Rafael Nahuel and the Mapuche struggle for the recovery of their lands, the Minister of Security, Patricia Bullrich, who is responsible for the current repression against the Mapuche communities, stated: “They are violent groups, who do not respect the law, who do not recognize Argentina, who do not accept the state, the constitution, the national symbols.”  Obviously, the Minister does not know that the Mapuche people were an independent, free and sovereign people whose independence was recognized by Spain in the Treaty of Killen on 6 January 1641, that therefore the Mapuche have their own heroes and heroines, their own national symbols and commemorative dates, previous to those that were created with the formation of the Argentine state, 200 years ago.  Does the Minister want the Mapuche to also forget their cultural and national identity and their recent historical past?

Following his visit to the country in May 2016, the United Nations Special Rapporteur on Contemporary Forms of Racism, Racial Discrimination, Xenophobia and Related Intolerance, Mr. Mutuma Ruteere, issued a report on the humiliating treatment of indigenous peoples in Argentina. Until this day, the Argentine government ignores and refuses to implement the Rapporteur’s recommendations.

The International Convention on the Elimination of All Forms of Racial Discrimination, in its Article 2.1a, states: ” Each State Party undertakes not to engage in any act or practice of racial discrimination against persons, groups of persons or institutions and to ensure that all public authorities and public institutions, national and local, act in accordance with this obligation; ”  The Argentine government ratified this Convention, but far from combating racism and discrimination, through Minister Bullrich, it encourages it.

During the military operation ordered by Judge Gustavo Villanueva last Thursday, members of the community were violently and indiscriminately attacked, tortured and illegally detained, including women and children. In an act of humiliation and to lower the dignity attached to her status as a Mapuche authority, the Machi (spiritual leader) of the community was forced to eat earth. The detainees were subjected to cruel, inhuman and degrading treatment in direct contravention of national and international legislation. In the meantime, President Macri does not miss any opportunity to criticize human rights in Venezuela, whilst repressing without any consideration the impoverished, most vulnerable and defenceless communities of Argentina.

Faced with such aggression directed against the Mapuche people, the Mapuche organizations inside and outside the Wallmapu must appeal both nationally and internationally that the rights of the Mapuche nation be respected and that indiscriminate repression be ended and demand that the Argentine state respect the international legislation that they have ratified.  We have to demand that President Macri give instructions to investigate the excesses of the gendarmerie and the Naval Prefecture as well as the disappearances of the numerous Mapuche and ensure that those who are responsible for such a treacherous crime are being punished.  We must call for an end to the escalation of violence, racism and racial hatred against Mapuche communities as encouraged by the responsible institutions of the current Argentine government.

Additional note:   The Mapuche nation-state was forcefully annexed in 1885, after a violent military occupation led by General Roca in 1879.  The Argentine government authorized him to move the border from the Colorado River to the River Negro, but lashed out against all the indigenous peoples of Patagonia in a clear attempt to exterminate them.  Until then, the Mapuche nation and other indigenous peoples had remained independent and were recognized under international treaties by Spain and the nascent states of Chile and Argentina. There has been no significant attempt so far by the governments of Argentina and Chile to address their colonial legacy, nor are there any initiatives related to repairing the crimes against humanity committed against the Mapuche nation.