The monarch in exile died peacefully in France on December 16, 2017, aged 75. He leaves behind his wife Princess Sheila Rani and sons Florian and Aurélien. During his reign of over three years, he has worked hard to promote the autonomy and rights of the indigenous Mapuche people of Araucania and Patagonia – regions which are currently occupied by the states of Chile and Argentina. 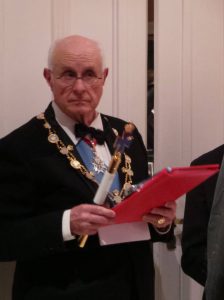 The Prince’s funeral will take place on Wednesday, December 20, 2017 at 10:30am in the Church Notre-Dame de Marmande, Allée de l’Eglise, 47200 Marmande, France. The official Chaplain of the Kingdom of Araucania and Patagonia will preside over the ceremony, and the late Prince Antoine IV will be transferred to Marseille to be buried in the family vault.

Succession to the throne of the Kingdom of Araucania and Patagonia.

Upon the declaration of the vacancy of the throne, there will be a regency opened by the spouse of the deceased sovereign as well as by the Council of Regency composed of the members of the Council of the Kingdom and the Council of State. As is customary in these circumstances, the Regency Council will, in accordance with the basic laws and the additional act, designate a successor to Prince Antonio IV in the coming days, thus ensuring the continuity of the Kingdom.

The Mapuche have struggled peacefully for their rights to autonomy, self-determination and self-government as enshrined by the UN declaration on the rights of indigenous peoples. The Mapuche continue to strive to preserve their cultural identity and to regain control of their ancestral lands.

They are currently criminalised and portrayed as unpatriotic and dangerous by right wing and nationalist groups in Argentina. Worryingly, sections of the Argentinian press call openly for the Macri government to expel the Mapuche from the country. The Kingdom has been instrumental in building international pressure through the UN and other international forums. It has helped to put pressure on both Chile and Argentina to respect the human rights of the Mapuche, and has helped to draw the attention of the international community to their plight.

Reynaldo Mariqueo* said: “Prince Antonio IV continued with fidelity and enthusiasm the tradition of his predecessor Prince Felipe I. He made visible the existence of the Kingdom of Araucania and Patagonia and the Mapuche situation in the French public opinion of Tourtoirac, the Perigord region and adjacent areas, always obtaining great interest from the population of the region.

For many Mapuche today it is difficult to understand the reason why Toki Magñil Wenu and the hundreds of lonko (chiefs) who participated in the Koyang (parliament) of November 1860 chose to reform their traditional system of government and create the Kingdom of Araucania and Patagonia. However, the reasons behind the establishment of the Kingdom of Araucania and Patagonia have a solid basis in international law. Argentina and Chile invoked the Doctrine of Discovery to legally justify the annexation of the Mapuche territory. In response, the Mapuche leadership formed a new governmental structure compatible with Western Christian norms. This involved the creation of the protectorate of a Christian Prince. The Mapuche, frustrated the application of said international legislation to their nation and laid the foundations for their independence to be recognised by the community of nations. The construction of the Kingdom of Araucania and Patagonia undermines the legality of the annexation of Mapuche territory by both states”. He added.

The Kingdom of Araucania and Patagonia is a constitutional monarchy that was established up by Mapuche chiefs with the help of French lawyer Orelie Antoine de Tounens in 17 November 1860, during which year he was elected King by a grand assembly of over three thousand Mapuche representatives from all four jurisdictions of the Mapuche territory. The Mapuche authorities realised that invasion by Chile and Argentina was imminent and sought to establish a stronger international legal basis to achieve international recognition for preserving their independence than the ancient tribal system that had stood in place thus far offered. Between 1862 to 1885 the Chilean and Argentinean states went ahead with the invasion anyway. However, the legality of the Kingdom remains undisputed by legal experts and the governmental structure continues to function in exile.

The Naval Prefecture of Argentina murder Rafael Nahuel and injure three other Mapuche youths
As another protester dies in occupied indigenous lands, Argentina must stop trying to erase its past