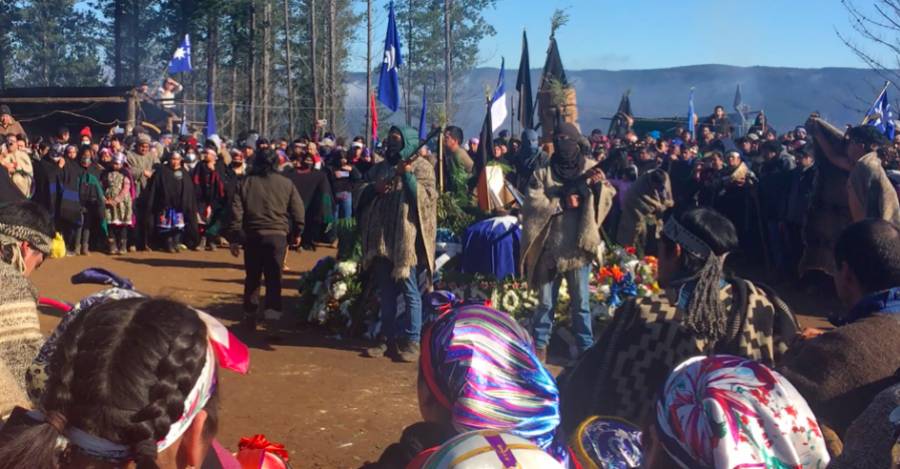 To our Mapuche people, oppressed peoples of the world and international and national opinion, the CAM declares the following

One: That we claim our Weychafe (activist/combatant) Pablo Marchant, outstanding militant of the CAM and member of the ORT, who fell in combat before the footmen of big business last Friday 9th July in Wallmapu. We wish to be clear and precise: in the context of the struggle against capitalist investors on our territory and for the Mapuche liberation, Pablo Marchant leaves a legacy of irreducible militant commitment, which we will honour in each act of resistance that we Weychafe execute across the length and breadth of WallMapu.

Two: That the direct responsibility for the death of our Weychafe are the police forces of the Chilean State and the multinational forestry companies, in this case Mininco, who act in conjunction with and at all cost for securing the interests of big capital in Wallmapu, Those are historically responsible for the disposition, the plundering, the genocide and the colonial domination of our people, logics that Pablo Marchant confronted with exemplary and revolutionary integrity, even giving his life for the cause.

Three: In contrast to what those hesitant and conceding Mapuche and non Mapuche sectors think, the death of our Weychafe occurred in the context of in which the bourgeois & colonial democracy has shown its true face, placing emphasis on repressive politics, that requires the acceptance of the docile Mapuche, against the insurgent. Its in this socio-political context that the conditions for the advancement of national reconstruction of the Mapuche is at play, nevertheless according to the ‘plurinational representatives’, these conditions are limited to the advancements or reversals derived from the constitutional convention, which is completely wrong as it will result in a new fallacy and fraud for our people.

Four:  That in the face of the constituent convention process, and all its instances of institutional legitimisation, we claim that we Mapuche have historically questioned being part of the oppressive state and surrendering to the colonial submission that this entails. In this way, Mapuche participation in the convention, as a supposed opportunity to “re-found” the country, in reality represents an act of submission to the colonial pact, which offers the possibility of readjusting the neoliberal governance that has exacerbated the devastation of Wallmapu in recent decades. The choice of this institutional route attempts to put a straitjacket on the sovereignty of our emancipatory political project and, at the same time, to submit it to the geopolitics of a criminal state. This calls into question everything that the autonomist movement has accumulated in territorial matters, especially if such a path is linked to the traditional political parties that have historically represented the interests of the national and international bourgeoisie. It is an absolute fallacy to believe that, in this context, the “political pragmatism” and the “historic opportunity” of the constituent assembly will make it possible to create a better correlation of forces for the Mapuche cause. On the contrary, no substantive progress has ever been made in territorial and political matters through this route, as can be seen in the failure of the initiative to buy and sell land promoted by the governments of the day, which was only at the service of the usurped property system and of extractivism.

Five: In this sense we reaffirm that the plurinational exit will never represent a real process of decolonization and liberation for our people, what’s more it’s a tactical tool to achieve the new legitimization that the landowning colonisers and bourgeoisie need for their political economic order, furthermore plurinationality does not touch or interrupt the reproduction of capital on our territory. The participation in the assembly beyond the paraphernalia that the faltering sectors give rise to, are functional to the land ownership system through which the encroachment of Wallmapu is sustained.

Six We reaffirm that the only route possible for the liberation of the Mapuche nation is the weychan and the direct confrontation against all expressions of capitalism in WallMapu, this way we call upon the lof, communities in resistance, and all the revolutionary organs of our people to converge in their territories to define coordinated actions, gather strength, and agree on a strategy to confront the new cycle upon us. with the aim of advancing a great Koyagtun (assembly) on the territory of Wallmapu where we make adequate agreements to materialise and strengthen the strategy for the national Mapuche liberation and the complete recovery of our territory.

As CAM we emphasize that the concrete base of this strategy must be in first place, the declaration of a direct war against the forestry and all expressions of capitalism on our territory. We call upon our people to remain firm with all the NEWEN (strength) and FEYENTUN (faith) for the defense of the Mapuche world.

Within this framework as an organisation, we pledge to not compromise the principles and line of reconstruction of the Mapuche nation, we will not betray the spilled blood of our fallen Weychafe, we will not abandon our political prisoners, or fail to recognise the sacrifice and the surrender of the pu peñi/lamgnen (mens and women) who resist with dignity daily from within their communities.

In the weychan fire we remind you of weychafe Toño !!

Freedom to all Mapuche political prisoners

With resistance and territorial control we advance towards Mapuche national liberation.

Chile: election of progressive indigenous academic to oversee constitutional reform is a blow to right-wing establishment
The history of the Mapuche is written by their adversaries