“They’ve jailed me because I represent the voice of my people,” Mapuche leader Facundo Jones Huala said.

An Argentine court decided Monday to extradite Mapuche leader Facundo Jones Huala to Chile, where he is wanted for alleged illegal possession of weapons, violating Chile’s immigration law, and starting a fire in the large state of PisuPisue in 2013. 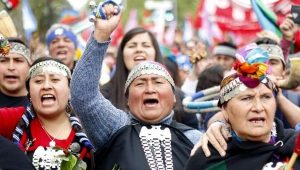 State forces dispersed Mapuche activists who awaited the court’s ruling using tear gas and arrested 15 people, including a pregnant woman. “They’ve jailed me because I represent the voice of my people,” said Jones Huala, who has pleaded innocent to the charges. Jones Huala’s defense team has filed an appeal, which the Supreme Court of Justice will have to rule on before he can be extradited. Jones Huala has also requested to be tried in his native Argentina. In 2016, federal judge Guido Otranto dismissed a first trial for extradition.

After the ruling, the Mapuche leader warned: “The dialogue is over, the extradition is looming, that is why they [state forces] were going around with a drone, they are going to evict the community that recovered the territory in Villa Mascardi, they will continue to attack Cushamen.”

Jones Huala is accused of being part of the Ancestral Mapuche Resistance (RAM), a supposed armed Indigenous group. However, Mapuche communities, human rights advocates, and social science researchers argue that RAM is a fake organization, created by the organs of state repression to justify state terror. The Mapuche struggle to reclaim their land, currently in the hands of large transnational landowners, has been met with state violence in both Chile and Argentina. Last year two Mapuche activists were murdered in Argentina.

Santiago Maldonado was disappeared last August after Argentina’s national police repressed a protest by the Pu Lof Mapuche community in Cushamen. Later, in November, a young Mapuche named Rafael Nahuel was shot in the back and killed by state forces who were evicting the Lafken Winkul Mapu community settled in the Mascardi Lake region.