Fear of Indigenous constituents in Chile

Fear of Indigenous constituents in Chile 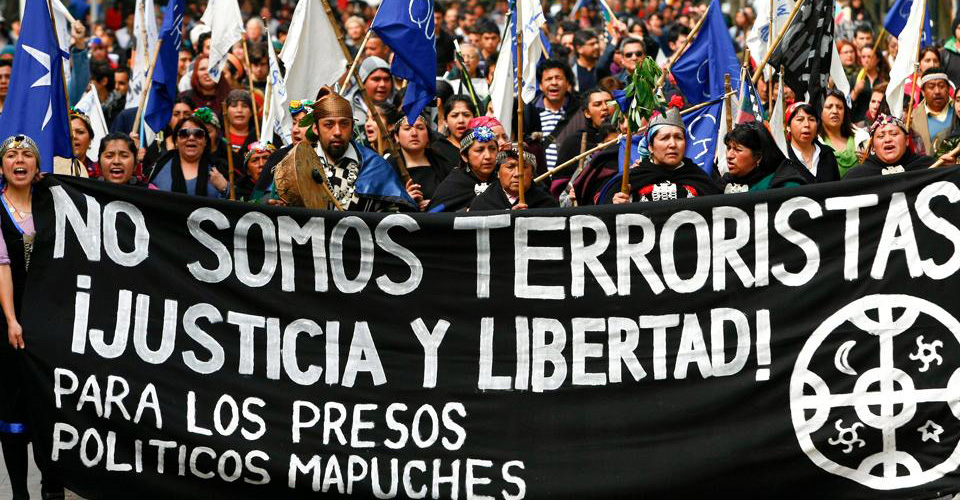 The protests in Chile left in evidence that its political-economic system, which for years was considered the successful model to follow, but excludes most of the population, mainly indigenous people. Photo: Leandro Crovetto.

The political caste and economic power have focused their attention on avoiding the presence of Indigenous representatives in the process of Chile’s new political constitution. The reason for their opposition is simple: the participation of 24 indigenous people would mean too much power and the Indigenous would be able to influence decision-making. However today, after centuries of exclusion, the time has come for Chile’s native peoples to decide.

A powerful voice resounded, coming from the most forgotten corners, from the suburbs, from the periphery, letting out a cry of liberation. This release, from a powerlessness accumulated over so many generations, was a clear and precise message to the vast majority of the population of a Chile that has been neglected. However, for some, that voice resounded more like Chopin’s funeral march and like a clear threat to their privileges which they so carefully safeguarded like a treasure.

This message, that emanated from the heart of the people and not from the political parties or the democratic institutions that govern us, has defined the public agenda for the coming years. Nevertheless, those who see their interests affected are trying to control the way this agenda will be implemented. And we have witnessed first-hand, how the members of this dominant caste make a serious effort to appear different from what they really are and pretend to be in touch with the urgent needs of a greater, common good. This spectacle, so typical of a “chameleon-like adaptation”, presents truly grotesque and undignified aspects of certain people, whom we know better than to trust in this sudden conversion.

Everyone has the right to make mistakes and rectify them, which is part of human nature. But it is another thing, to disguise oneself and feign to always be in tune with the times, in an effort to maintain control of the strings that move power. The latter might not be an inconvenient matter, if it were based on a decision to serve the cause of those,  who continue to hope that this new development will finally –once and for all– include them too.

Probably the best symbol of the re-evolution of civic political action in recent times is the people of Chile’s support for the Indigenous’ demands. A movement that has become evident in the use, even internationally, of the Mapuche flag and that of the other Indigenous Peoples, as a symbol of rejection of the political caste.

It is also a gesture of vindication by a Chile that has been excluded from the development model, who has proven, by deed, that it has been condemned to poverty and a lack of opportunities, as if this were all part of some divine plan.

Every time the Mapuche people have protested, the authorities’ response has been murder, criminalisation, rape, torture, jail and, in the best of cases, false promises and deception. This is a behavioural pattern that is evident in the answers given to the people of Chile regarding their demand for justice and the simple respect of their rights. It is true, that in this legitimate and necessary social uprising, radicalised groups have also participated and decided to prioritise violence. While at the same time, the presence of infiltrated police officers dressed as civilians has been verified, whose objective was to justify the repressive action of an authority that has never been willing to find a reasonable solution.

But why is the political caste questioning the seats reserved for the Indigenous in the new constitution? The answers are known and very varied, but they are rooted in a colonialist racism that maintains a very evident contempt for those who have been declared politically inept and second-class citizens.

These groups of power prefer the Mapuche people and other Indigenous Peoples to remain limited to folkloric expressions, that keep them at bay as “anthropological curiosity” or simple museum pieces. But when we demand real political power and real economic and territorial rights, then the issue becomes an inconvenience that needs to be dealt with as soon as possible.

At the very least it is humorous, that a state that has barely existed for 200 years should proclaim itself the “owner” of the Mapuche people,  who have existed for thousands of years. To such an extent that even Article 7 of the indigenous law says: “The State has the duty to promote indigenous cultures, which are part of the heritage of the Chilean Nation”. The world is upside down, in the words of Galeano.

THE REAL PROBLEM BEHIND THE RESERVED QUOTAS

The real conflict lies in the political power that we indigenous people have never had since this republic was founded, a country incapable of recognising its essential plurinationality. The political caste, which is embodied in the tacit agreements of the government and the opposition in power, has prevented any change from happening. The strategy is as simply as limiting the participation of independent actors and indigenous people, making them irrelevant in fundamental decisions. It is set out that independent actors and indigenous people can participate through political parties (which are part of the problem) to guarantee the constituent process’ legitimacy, but with no capacity whatsoever to achieve the changes that are needed.

In an undesirable scenario for the power elites, the intrusion of 24 Indigenous Peoples would influence the results of the vote on the new Constitution and could jeopardise the agreements of the 2/3, between the government and the opposition. This is where the real fear lies: too much power for the indigenous to decide. Without a doubt, we could be an opportunity for the invisible population of Chile, by putting forward and supporting their demands. And not those of the political caste. Thus our conclusion is clear: Chile’s path is tied to the destiny of its native peoples and their unity with those excluded, who suffer discrimination.

As is well known, demands for collective, territorial and political indigenous rights always clash with the interests of the groups in power. This dates back to over a century ago and is largely explained by the “advantages” the Colonisation Law offered them,  which provided them Mapuche land, with free titles, plus money and animals. Under these exceptional conditions, these colonists began to expand their influence through “corridas de cerco” (gaining territory by re-establishing the original land demarcations).

An example of this is Edmundo Winkler, who murdered Lonko Juan Pailahueque in 1916 to usurp his land. This event is part of Chile’s hidden history. This procedure is still repeated today, with the Angelini and Matte forests, the hydroelectric plants or the real estate companies such as that of Mr. Bruner Moreno in Pangipulli, who irregularly buys indigenous lands from land titles. These families first became an agrarian economic power and then a political power of European origin, which coined an ideologically racist, opportunistic and violent discourse against the natives. All this made it possible to justify land tenure, under the guise of an alleged civilising discourse.

Both the Indigenous and the mestizo people of Chile are always urged to vote, but never to decide. The way constituents are elected and the appointment strategy will always come with its  fine print, which is a manual of how to retain power. This is the only formula that the caste will have, to prevent Chile from really changing.

The Chile that has been neglected in all its manifestations must unite. On our side, as native peoples we can build a new Chile from our deepest roots, especially with regard to Kume Mongen or the concept of living well. This way of life must be a fundamental pillar of the new Constitution: it must be made clear that the rights of the people are inseparable from the rights of Mother Earth or of nature. Understanding this small point will allow the human species to be preserved. This is the only way to ensure a healthy world, so that our children can exercise the rights for which we have fought so hard and so many people have suffered and even lost their lives for.

That is why we have set up a very precise strategy: to play by the opponent’s rules and to constitute our own instrument of participation. That is why we have taken the option of creating our own party: Por el Buen Vivir de Chile (For the Well Living of Chile). In our party there are neither great fortunes desperate to influence, nor intellectuals disconnected from reality, nor market technocrats. This is where the common people are, the ones who find it hard to make ends meet and who know better than anyone else which country they want to live in.

We will tirelessly follow this road filled with obstacles. In the end, inevitably, this road will lead to the victory of the country’s true representatives.

The article is written by Diego Ancalao Gavilán.

Gavilán is a Mapuche from the Lonko Manuel Ancalao community in Purén Indómito, a teacher and political analyst. He is president of the Institute for Indigenous Development and Leadership Foundation, and author of the books “Mapuche, hijo de dos naciones” and “Otra vez hoy, la tierra se levanta, hacia un mundo del Kume Mongen”.

Debates Indígenas (Indigenous Debates) is a digital magazine which aims to address the struggles, achievements and issues of Indigenous Peoples with contributions from academia and activist engagement and a perspective from within the territories and communities. Debates Indígenas aspires to become a communications medium of reference for Indigenous Peoples as well as an instrument that contributes to the defence of human rights and nature.