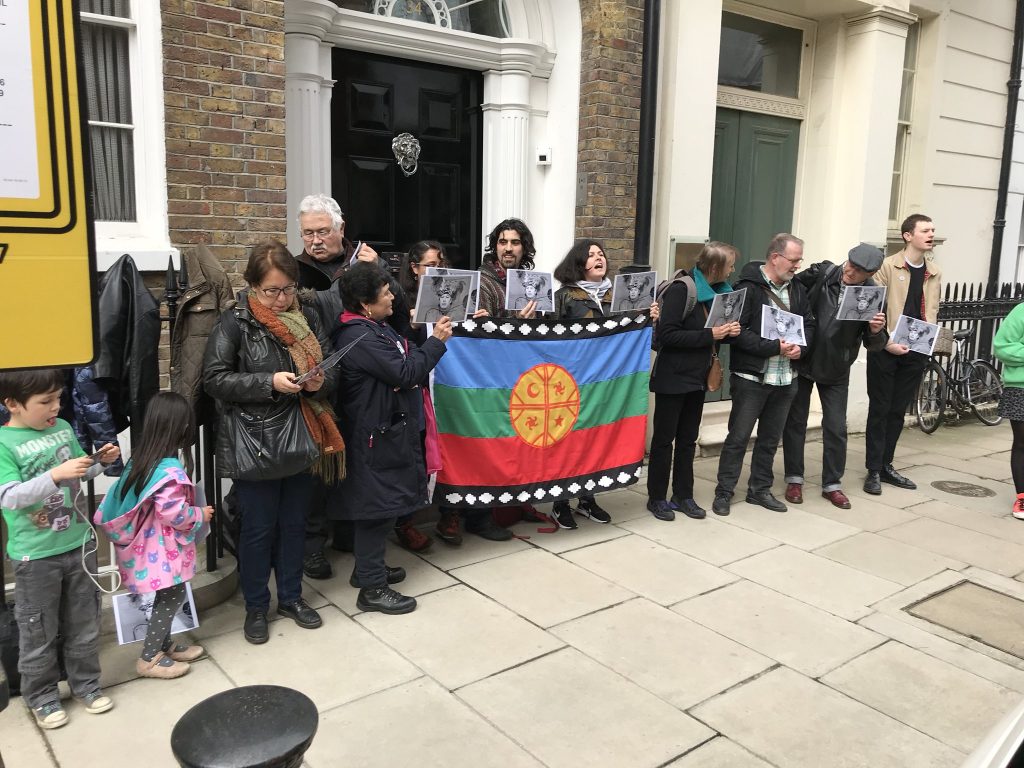 Mapuche International Link, a UK-based non-governmental organisation that campaigns for the human rights of indigenous people in Chile and Argentina, has organised a protest to take place at the Chilean Embassy in London on Tuesday 10th April 2018 from 4pm.

Mapuche Machi (spiritual leader) Celestino Córdova was sentenced to an 18 year jail term in 2014 for allegedly killing Werner Luchsinger and his wife Vivian MacKay the year prior in an arson attack on their home located in the Araucania region of Chile, about 700km south of Santiago. However, the local indigenous Mapuche community dispute the official version of events, and his conviction comes in a political climate that has seen activists targeted and imprisoned on scant evidence by a police force that is itself being investigated for fabricating evidence against Mapuche leaders.

Mr Córdova has been denied his right to complete a rewe (spiritual ceremony) of renewal for himself and his community. He has petitioned the prison authorities by requesting 48 hours escorted leave to complete this ceremony. His request was denied and he is now in the 88th day of his hunger strike. Representatives of the newly elected Sebastián Piñera government have thus far ruled out granting this request. Indeed, the governor of Cautín, Mauricio Ojeda, has threatened that the prison authorities could force-feed him. Mr Córdova’s request is supported by numerous left-wing politicians in Chile, including the newly elected Mapuche Emilia Nuyado of the Socialist Party, and two other members of the Human Rights Commission in Chile’s Chamber of Deputies.

Amnesty International has condemned the Machi’s treatment, pointing out that serving a jail term does not mean that the authorities have the right to deprive people of their access to expression of their religion or spirituality.

It is unlikely that the newly elected right-wing government will grant Mr Córdova’s requests, having recently strengthened Pinochet’s terror laws, which have been disproportionately applied against Chile’s indigenous population. Piñera signed into effect the reformed law in late March. The administration is already using it to send in well-armed, military-style police to attack and arrest unarmed Mapuche protesters in Temuco, 845 km south of Santiago.

The police have frequently used water cannons and excessive force against demonstrators who are demanding the return of their territory, which was annexed by the Chilean and Argentine governments at the end of the 19th century.

‘Machi Celestino’s health is in serious jeopardy and the next few days will be crucial in determining whether his recovery is possible. Today we are simply calling on the government of Mr Piñera to respect the spiritual and religious rights of Chile’s indigenous people – rights which are embedded in international laws and declarations that Chile has signed.’

‘The right to freedom of expression of religion is one of the most fundamental human rights. This is a human right that exists independently of whether a person is incarcerated or not. It is vital for Celestino, and his community, to be afforded the opportunity to exercise these rights – just as Chile’s imprisoned Christians and other religious groups are rightly able to.’

‘We hope that the Piñera administration will not begin its tenure by allowing the death of a Mapuche leader through hunger strike. This would severely alienate large numbers of Chile’s indigenous populations, who are already skeptical of Piñera’s authoritarian and neoliberal regime.’

The Mapuche are the largest indigenous group in Chile and Argentina, numbering around 200,000 in Argentina, and around 1,508,722 in Chile although estimates vary.

The details of Celestino’s physical condition are striking. He has reportedly lost 21 kilograms since he began his hunger strike in late January and his heart rate is around 48 beats per minute (medically this should be between 60 and a 100 in a healthy adult). Indeed, a recent medical report has indicated that the health situation of the Machi presents a serious deterioration and he is at severe risk of death or severe irrecoverable consequence.