Mapuche groups to present at The Hague against Argentina & Chile for acts of genocide.

Home /News/Mapuche groups to present at The Hague against Argentina & Chile for acts of genocide.
News |

Mapuche groups to present at The Hague against Argentina & Chile for acts of genocide. 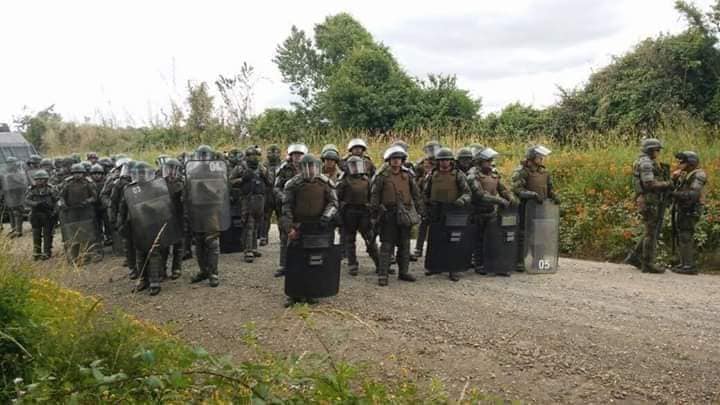 On the 20th of February 2019, HRH Frederick I of Araucania and Patagonia urged the International Criminal Courts (ICC) at The Hague to take measures against Presidents Macri of Argentina and Piñera of Chile, for breaking international law with regard to the treatment of Mapuche communities in both countries.

This plea has been strengthened by an official communique at the ICC.

The level of repression that Mapuche people face today requires urgent external intervention due to the lack of political will by both states to address the conflict in a constructive manner.

International convention defines genocide as: any act perpetrated with ‘intent to destroy, in whole or in part, a national, ethnical, racial or religious group, as such: (a) Killing members of the group; (b) Causing serious bodily or mental harm to members of the group; (c) Deliberately inflicting on the group conditions of life calculated to bring about its physical destruction in whole or in part.’

The Argentine media, including current members of the Government, identify the Mapuche as ‘the enemy within’. Leaders are imprisoned, tortured and threatened, while others are murdered and made to go ‘missing’. Human rights groups have declared that at least 100 Mapuche people have been killed since the start of democracy in 1983. Deaths in the community are classified as ‘suicides’ as was the case with Lonko Fermin Acuña who was found dead in July 2018.

On February 5th, the Chilean Government ordered a state of emergency in order to justify a huge military presence on traditional ancestral land. Local communities have complained of access being blocked and continual harassment by the police and army, who use the pretext of putting out fires to disrupt communities such as Temucuicui.

Prince Frederick I comments ‘In the past, the Argentine and Chilean states colluded in the physical genocide of the Mapuche people, to destroy its state. Now they collaborate in order to repress and criminalise their just demands for their rights. They use legislation and anti terrorist laws to violate their individual and collective human rights, police raids, detentions, violence and even assassinations, all techniques designed to exterminate them as a people.’

The criminalisation of Mapuche ancestral claims are now so extreme, that even those who sympathise with the Mapuche people are pursued and even killed, as was the case with the young Argentine Santiago Maldonado. Lawyers such as Sebastian Saavedra Cea, Karina Riquelme Vivieros and Edwardo Painevilo Maldonado, CIDSUR have been harassed by Chilean state forces.