IS SHE THE MANDELA OF THE MAPUCHE, OR A MURDEROUS TERRORIST?

Home /News/IS SHE THE MANDELA OF THE MAPUCHE, OR A MURDEROUS TERRORIST?
News |

IS SHE THE MANDELA OF THE MAPUCHE, OR A MURDEROUS TERRORIST? 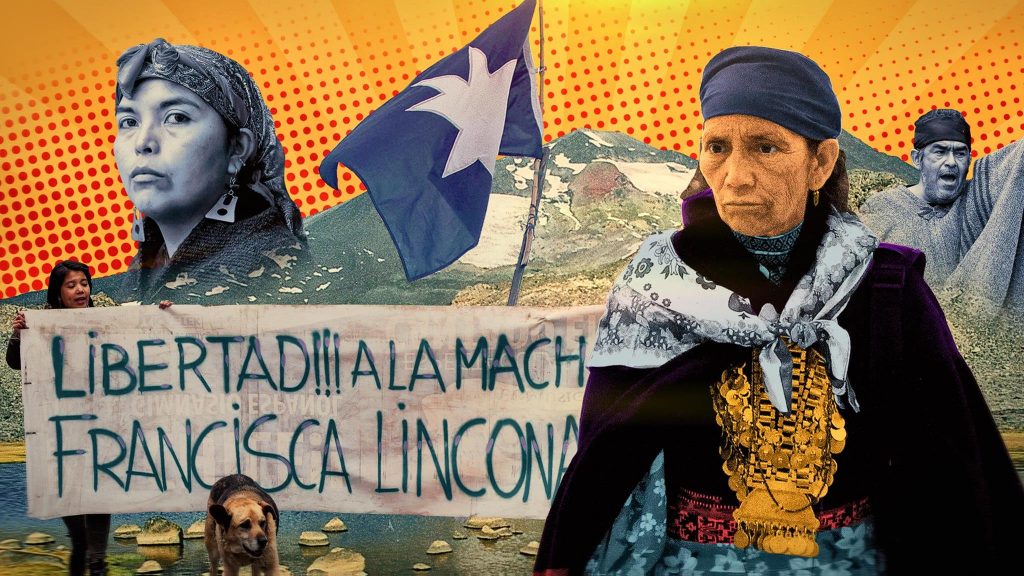 Fire and outrage shattered the small-town tranquility of Vilcún in the early hours of Jan. 4, 2013. In the end, ranch owners Werner Luchsinger and Vivan Mackay, aging mainstays of a sleepy town in the south of Chile, were dead and their home destroyed by arson. Eventually, 11 suspects were charged, all indigenous Mapuche activists. The face of that group? A petite spiritual healer and grandmother, thrust into her country’s spotlight and branded a terrorist.

Francisca Linconao, 61, certainly doesn’t look like she’s capable of murder. Though she’s not often pictured smiling, her large brown eyes are gentle and kind. As a Machi, known for saving lives and providing guidance, she is a spiritual healer respected among the Mapuche community. Her arrest, trials and hunger strike launched a media frenzy and a storm of protests. Now her battle for land rights for the Mapuche and crusade against an anti-terrorism law that has been weaponized against her people have become an international cause. She strenuously denies the murder and the terror charges, but Linconao has no problem instilling fear in the right people.

“WE AS MAPUCHE DO NOT HAVE JUSTICE. THE RICH HAVE JUSTICE BECAUSE THEY HAVE MONEY TO BUY THE JUDGES.
Francisca Linconao”

Linconao spent her childhood in Padre Las Casas, a town of about 40,000 in southern Chile, according to journalist Nicolás Gutiérrez, who has written about the Machi’s legal proceedings. Little is known about her life prior to her entrance into the public eye in 2008, as Mapuche spiritual leaders are typically private. To become one, she likely would have had spiritual visions revealing her identity. “Machis are intermediaries between nature and humans,” says Manuela Royo, one of her former attorneys. “For this, their persecution is also a persecution of life and culture.”

The Mapuche have inhabited the land between the Bío-Bío and Toltén rivers in southern Chile for more than 2,000 years. Much of that time has been spent defending or winning their land back from would-be invaders. The Mapuche were absorbed into the Chilean state in 1883, with the government seizing much of their ancestral lands. Later, in the early 1970s, Salvador Allende’s government began the process of restoring land ownership to Mapuche communities. This came to an abrupt end with Allende’s death and the emergence of dictator Augusto Pinochet. His military government reversed the Allende transfers and sold the land to the highest bidder. Ever since, Mapuche activists have been protesting against development projects impacting their environment, as well as advocating for restorations of land that belonged to their ancestors.

In 2008, following in the footsteps of Mapuche activists before her, Linconao used a provision from the international Indigenous and Tribal Peoples Convention to appeal for a constitutional protection against the Sociedad Palermo Limitada, a forestry company owned by Chile’s powerful Taladriz family, for cutting down native  forests and medicinal plants. Her argument rested not only on the wildlife, but her role preserving cultural heritage as a Machi. She won the novel legal victory, catapulting her into fame as a “defender of spiritual and land rights,” according to Hernando Silva, a legal coordinator of indigenous advocacy group Citizen’s Observatory.

She also earned powerful foes. Emilio Taladriz Montesinos, known locally as “Don Emilio,” never forgot his legal defeat. “The creation of the indigenous law generated perverse incentives for violence,” he said at a 2016 conference. “The intentions were good, but the results have been disastrous.” La Ley Indigena, adopted in 1993, has formed the foundation for Linconao’s legal activism from publicly decrying socioeconomic inequality to speaking out against police brutality in the deaths of Mapuche activists.

All her prior controversies were dwarfed by the 2013 terrorism charge. The state claimed, based on the testimony of a single witness (who later recanted and said he was tortured by police), that a group of Mapuche people were on the ranch to protest land rights, as well as the anniversary of Mapuche activist Matías Catrileo’s death. The prosecution alleged that these protesters fired at the Luchsinger-Mackay home before setting it on fire, an act of terrorism resulting in murder. Police soon arrested Linconao at her home, and she was “transformed into a symbol, a religious authority,” who was “detained with violence before being implicated,” according to Gutiérrez.

The legal saga stretched over more than five years, with ups and downs and reversals along the way sparking public protests. When Linconao finally was released from jail on house arrest in early 2017, she weighed only 88 pounds. While three activists were convicted in May, she was one of eight acquitted — but it’s hard to rest too easy when her last acquittal was overturned on appeal. A spokeswoman said Linconao could not be interviewed for this story because of her weak health. “We as Mapuche do not have justice,” she said in a statement last year. “The rich have justice because they have money to buy the judges.” Her sharp rhetoric endears her to fans. Silva says when he traveled recently with Linconao, “many people, of many different social classes” stopped her in airports to offer their support.

As a formerly imprisoned member of a repressed minority who used a hunger strike as a weapon, Linconao has a few things in common with Nelson Mandela, the South African legend who would have turned 100 this month. But she doesn’t aspire to lead her country. Instead, Linconao’s activism has shifted to eradicating the anti-terrorism law that put her behind bars in the first place.

The Internal Security of the State Law was put on the books under Pinochet and was used to prosecute enemies of his regime. Similarly to the USA PATRIOT Act, the anti-terrorism law can suspend important civil rights. Suspects can face indefinite detention without charge, wiretapping and extended prison time. In 2014, the Inter-American Court of Human Rights condemned Chile for targeting Mapuches under the law.

With Linconao’s case symbolic of the Mapuche struggle, “she’s an icon now,” says Gutiérrez. For her supporters, her struggle has blended with their own. For her detractors, her victories are affronts on justice. When she was acquitted and three fellow Mapuches were convicted, Chile’s President Sebastian Piñera tweeted: “An affectionate hug and solidarity to the Luchsinger-Mackay Family. Today, with the prison sentence through the anti-terrorism law of 3 of the accused, justice was taken a great step forward, and impunity suffered a strong defeat. I renew my promise of 0 tolerance for terrorism.”

Love her or hate her, Linconao has set her country aflame. While her success remains uncertain, her supporters might take comfort in the fact that the Mapuche people were never conquered by the Spanish.