Naomi, an eleven year old Mapuche girl, spoke to Alas FM about the oppression she suffered during a police raid on the Pu Lof Resistencia Cushamen community on the morning of January 10th 2017. 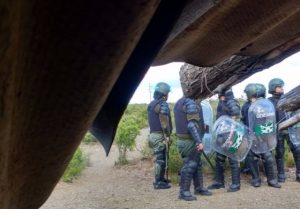 My name is Naomi and I’m eleven years old. It was really difficult because I was on guard duty with my mum, and I had to run outside playing my kulkul (horn). There were lots of police, too many. Trucks, vans, everything. They began to arrive, one, two, three and so on. I ran around playing my kulkul, and woke up all the women. There weren’t many of us because everyone was off with the animals or doing that kind of thing. Some women came over to see what was going on. There were drones and everything. They cut the signal to our phones so we couldn’t tell people what was happening.

We went home and the other girls arrived who were on guard duty, because they were putting up a fight as well. The police came running down and trapped us inside the house. We put tables up and everything. And a man came and told us ‘Give me your details! Give me your details!’ We said ‘No, we are Mapuche and that’s it.’ They came in and sprayed us with gas. I had a small child in my arms and I covered his mouth, but I breathed it all in and started throwing up. It was really hard because I wanted to get the child out and so I gave him to my mum to look after, but they were hitting my mum and hitting the child who’s only eight years old. I stuck out my hand and they hit me on the hand.

They wanted to get us out through the window so they dragged me by the hair. They made me get on my knees and forced a sweet into my mouth. I spat it out and they were saying: ‘Shut up! Stay quiet! Stay on your knees!’ A policeman came and pulled down my face mask and said ‘This one is young, give her something to calm her down.’

And before that another police had grabbed a woman by the hair and dragged her out. She was yelling ‘Don’t you realise I have a child?’ and then he just grabbed her by the hair and pulled her out saying ‘You should have thought of that before, idiot.’. And I brought her blankets and everything, because she didn’t have many clothes on.

They came on horses and there were loads of them. They hit us, they hit me on the head with a club.

And they had my mum almost naked on the floor, and they wouldn’t let another woman go to the toilet. I asked to go to the toilet but they wouldn’t let me go. I asked if my mum could go with me but they said no, that she might escape. My mum told them ‘But I have handcuffs on.’. And from there they took me to the bathroom but then they told me ‘Right, let’s go.’ and a woman asked us for our details. And I said to her ‘I won’t go with you because I don’t know you and you don’t know me. I’m going to stay right here if you don’t let me go.’ They asked a girl that was there if she was my auntie and she said yes, and so we went.

They kept me on my knees. They threw my mother into a big group of police. There were loads of them, they laughed in our faces.

They tipped up the table, they threw everything around. I put my hand over the child’s mouth because the gas was making us vomit. I haven’t eaten anything since yesterday because of the gas. They left me there, for a while, down on the ground. After that they took our horses. They had me tied up and I was saying to them ‘The children, the children!’. I couldn’t see them because they took me to another place. I saw one of the boys who they were beating, who was one of the prisoners. I saw everything, blood everywhere. Here, on his side. And here.

We were screaming and the officer who was with us was screaming ‘Shut up, shut up!’.

The house where we slept was totally destroyed. And as if that wasn’t bad enough, because there was nobody in the other houses, they just went and smashed them up. They smashed the glass in a door that we were going to put in our house. They went round the houses, destroying the mattresses. The plastic covers in the windows were in good condition, but now you can’t sleep in the houses because they let the air in from all sides. They turned over the tables, smashed the doors, broke a wall. And we were there and we saw everything.

They came from every direction and they grabbed me by the hair, and they were shouting horrible things at a woman. They grabbed us and took us away.

They hit us loads of times. They hit me with their clubs and gave me a big bump. I’m scratched all over from where they dragged me along the ground. I’m covered in thorns and bruises. My mum is covered in bruises as well.

But this is nothing. In the future it’s going to get worse. We’re not going to leave because this is the place where our grandparents were born.

Listen to Naomi tell her story on FM ALAS: